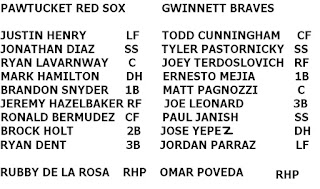 Pawtucket wins, 5-1. Chris Hernandez pitched four innings of relief and got the win for the Red Sox.

Starter for the Gwinnett Braves was Omar Poveda. Poveda gave up three runs on seven hits through six innings.

The PawSox scored their first two runs in the first inning. Mark Hamilton hit a two-run homer. They scored a third run in the fourth by way of an RBI single by Brock Holt. Braves reliever Wirfin Obispo pitched the seventh inning, gave up the last two runs when Pawtucket hit a few singles and Brock Holt scored on a wild pitch.

Gwinnett scored their only run in the fifth, when left fielder Jordan Parraz hit a solo home run off Hernandez.

two things:
1. Ninth loss in a row for the Braves.

TONIGHT! It's Boston Strong night at the Braves ballpark. Jason Varitek, Rodney Harrison, Matt Ryan, and Dee Brown will be there. Alfredo Aceves starts for Pawtucket, Daniel Rodriguez for the Braves.
Posted by Jenks at 12:18 PM