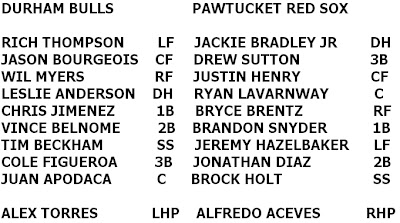 Good morning! Pawtucket defeated the Durham Bulls (TB) last night 10-1. I'm sure you're wondering what happened. I am here to take you through that journey, and also to take myself through that same journey because I haven't read about it yet.

You all know Alfredo Aceves, right? Teddy bear? Aceves is in Pawtucket, which I am sure he is thrilled about. He started last night's game and it was baby stuff for him, as he pitched six scoreless innings and struck out six. Aceves did give up a couple of hits, but none for extra bases. Thanks, Ace.

And you all know Alex Torres, right? Easy going? Prospecty Venezuelan lefty, kind of needs to prove himself this year? Torres started for Durham, pitched five mediocre innings and gave up four runs, three earned. Jackie Bradley Jr got a couple of hits off him. The real crapfest started when reliever Jim Paduch came in and the PawSox used him as a chew toy.

The game was moving along at a decent clip until the bottom of the third, when the Red Sox started scoring. Shortstop Brock Holt (not "Holtz") walked with one out. Bradley followed that with a single, and then Mark Hamilton came in to pinch hit for Drew Sutton. Who knows why? Hamilton grounded into a force out, eliminating Bradley. Catcher Ryan Lavarnway entered, singled, Holt scored. But the real money shot was Bryce Brentz' line drive double to left that scored two runs. I wonder how much he benches?

Bradley led off the fifth inning with a single, and then made it to third on a wild pitch and a passed ball. Bradley scored on a sac fly, making it 4-0 Pawtucket.

Bottom of the sixth, Jim Paduch makes an appearance. Paduch struck out Bryce Brentz, but Brandon Snyder got him for a good double. Left fielder Jeremy Hazelbaker followed with a single and then stole second base. And then Snyder and Hazelbaker scored when little Brock Holt hit a line drive single to right. 6-0 Pawtucket.

Hey, didn't the Durham Bulls score a run? Yes, in the eighth inning. Chris Hernandez was pitching in relief, which is unusual but I think it's fair to say he needs to work some stuff out. Catcher Chris Gimenez hit an RBI single. It wasn't that exciting. Even Mrs. Giminez was all, IS THAT ALL YOU GOT?

Bottom of the eighth. Brandon Snyder leads off, gets a base on balls. Hazelbaker and Jonathan Diaz ht back-to-back singles, scoring Snyder. Hazelbaker then scored on a single by Brock Eckstein. And then Bradely Jr walked to load the bases afresh. Paduch got Hamilton out, but that was the final batter he would face. Lefty chunkster Adam Liberatore stepped into the game, gave up an RBI single to Justin Henry and then Lavarnway hit a sac fly, but Liberatore struck out Bryce Brentz to end the inning. Who strikes out more than Brentz? Hazelbaker only.

Chris Hernandez went on to pitch the ninth inning. He gave up a single but everyone else grounded out. Paz afuera.

two things:
1. Brock Holt had himself a time, with three RBI for the night. Everybody on the PawSox got a hit, except Sutton/Hamilton.

2. Obviously, if you want a more intelligent, nuanced look at the Durham Bulls, you must read Watching Durham Bulls Baseball: "What isn’t guesswork is that the last four games [Paduch's] appeared in the Bulls have lost. That implies that (1) his luck is really awful or (2) he’s going into games that the management thinks are marginal." So yes, you should definitely worry about Jim Paduch.

3. Also: "Paduch looks to have fallen into the “veteran AAA relief pitcher” category for the rest of his days.  While a string of good outings may lead to a promotion to the big club, don’t expect him to stay up there too long.  His career 4.58 ERA and 6.6 K/9 is really nothing to write home about.  As a 30 year old pitcher who has experienced some wear and tear, his career, unfortunately, is on it’s decline." - from wlbbjps (?)

4. Drew Sutton had some oblique thing, is why he left the game. Here's to a speedy return to the lineup, because suddenly I appreciate his contributions.

5. “Hopefully God will keep us alive to see another game,” said Aceves when asked to look ahead to his next start. OMG TERRORIST SLEEPER CELL HOLY WAR. (Pawtucket newspaper)

6. "But now, 20 years later, the stadium is a movie star who has aged quickly and is in want of expensive cosmetic surgery. The original debt, with refinancings, was paid off last October. But DBAP is no longer a new ballpark and, after more recent borrowing, it's far from debt-free. It's the sixth-oldest in the 14-team International League, and 12th-oldest of the 30 U.S.-based Triple-A teams. The new lease will see the team to the cusp of the stadium's 40th birthday." - David Fellerath, Indy Week. You should read it!

TONIGHT! It's Allen Webster v Alex Colome. Could be good. You should go, because it's the Bulls and it's only once a year.