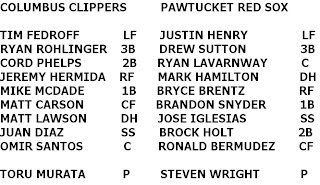 Cor, DM! Pawtucket wins 5-1, even though Toru Murata seemed to be giving the PawSox the business for the first few innings. Oscar Villareal and his sick dance moves get the win.

Steven Wright started for Pawtucket and was all over the place for the first couple of innings. Typical knuckleball stuff: Walks and wild pitches and passed balls. A double play really saved Wright's ass in the second inning. Wright pitched four innings, but he was up to 84 pitches and so Oscar Villareal swept in and became the hero.

Trevor Bauer was supposed to start for the Clippers, but something happened and instead we got Toru Murata. Murata pitched six innings and gave up four runs, including three home runs. Of course, I missed a couple of them when I went to get beers. But I did see Iglesias' home run, which was great. There was the added bonus of seeing Iglesias flex his muscles as he crossed the plate, which I think his teammates dared him to do.

Bryce Brentz and Brandon Snyder hit back-to-back home runs in the fourth inning, then Snyder homered again in the eighth. Pedro Beato pitched after Villareal, was pretty badass. Anthony Carter pitched the ninth and gave up a double, but ultimately kept Columbus scoreless.

No sign of Hanrahan or Breslow, but that's fine. They were holding the team back, anyway.

2. Just found out that Jon Hee retired. Crazy! I saw him last night in the dugout, saw he was on the "disabled" "list", and now this. I bowled with Jon Hee, he seemed reasonably nice even if he was no Handsome Randy Williams.

I guess that's all. I'm not going to Buffalo this year, unless I win millions of dollars. That's an entirely different story, though.

Rubby De La Rosa pitching right now for Pawtucket, so go check that out while I comb my hair.
Posted by Jenks at 12:10 PM