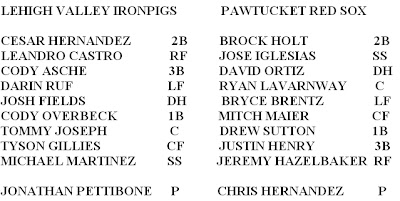 IronPigs take another one, 8-6. Win goes to reliever Jake Diekman. Chris Hernandez had a tough start and gets the loss for Pawtucket.

Hernandez certainly labored through his five innings of work and has the 97 pitch count to show for it. He gave up seven runs on six hits, although only three were earned. Hernandez also gave up a couple of home runs.

Jonathan Pettibone got the start for Lehigh Valley. Pettibone, after a scoreless first, led the second off by hitting catcher Ryan Lavarnway with a pitch. Lavarnway became a non-factor when Bryce Brentz grounded into a force out, but then Pettibone allowed center fielder Mitch Maier to single. Pettibone then walked Drew Sutton to load the bases, then walked in a run with Justin Henry at-bat. 1-0. And then a sac fly from Jeremy Hazelbaker made it 2-0 Pawtucket.

Drew Sutton and Jeremy Hazelbaker provided a pair of runs for the Red Sox in the bottom of the fourth, tightening the score a little to 6-4. An error by second baseman Brock Holt in the fifth allowed another run to score for Lehigh Valley. 7-4 IronPigs. In the fifth inning, Pawtucket scored another pair of runs off reliever Justin Friend, with RBI singles from Mitch Maier and Justin Henry. 7-6!

IronPigs first baseman Cody Overbeck hit a solo home run in the sixth off reliever Pedro Beato to make it 8-6. Relievers Diekman and Michael Stutes held the PawSox scoreless for the remainder of the game.

he doesn't know who jesus was or what praying is:
1. Mitch Maier went 3-3. This guy David Ortiz got no hits. Dude, we're trying to win some ballgames here. This is not a place to work out your personal shit.

4. As I'm sure you have heard, Steven Wright was supposed to start this game but was called up to Boston.

5. The Phillies have a slew of young pitching talent in the system that they are very excited about. Pettibone is one of the "Baby Aces" they're high on. He's just a baby! I mean, he's a big, strong, athletic kid... But I think he's barely 22. Phoul Ballz has an interview.

6. PawSox manager Gary DiSarcina talks about our new boyfriend: "He gets down in the count and is not afraid to hit with two strikes,” DiSarcina said of Maier. “We love having him here. He’s a baseball player and he throws up good at-bats every time he goes out there.” I love having him here, too! (Craig Forde)

7. "Can you return a redbox movie to any redbox? Does it have to be the same one you bought if from?" - He's just a baby!

TONIGHT! It's Terry Doyle. According to some dudes who sat behind me the other night, "That's Doyle's brother!" Opposing is... Cesar Jimenez?

Have a great night, everybody.
Posted by Jenks at 9:07 AM