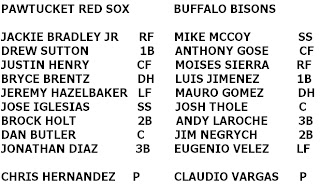 Oscar Villareal LOSES, 8-4, even though the bulk of the destruction was the result of SP Chris Hernandez' pitching. I'm sure it will all get sorted out in heaven.

El Zurdo Hernandez gave up four runs on eight hits through five innings. He threw 96 pitches, 55 for strikes. Sounds exhausting, geez. He also gave up a home run, but who hasn't lately? Besides, Buffalo is SMASHING the IL in like all the offensive categories.

Starter and winning pitcher for Buffalo was Claudio Vargas, a man I am not familiar with but I'm sure I will eventually declare my love for. I have to learn all these Blue Jays people. I will say that he's 34 and been around the block, including a stint with the Expos. Yes. Vargas went six innings, gave up all four Pawtucket runs. He also had great relief. Let's talk to it!

Buffalo got a good jump on the scoring, picking up two runs in the first inning. Pawtucket tied it in the second, which featured doubles from mighty slugger Bryce Brentz and large catcher Dan Butler. A mess o' singles in the third inning put the Red Sox up 4-2, ha ha very funny you guys. Buffalo achieved ramming speed and scored runs in the third, fourth, sixth, seventh, and eighth inning. Joel Hanrahan, former Pirate and current Boston reliever, pitched the eighth inning and gave up two runs and I'm sure you can read all about it anywhere else but here.

I am not familiar with Neil Wagner's work but he struck out the side in order in the ninth inning to keep the Bisons in the win column. Thanks for nothing, Butler, Diaz, and Bradley.

By the way, Jim Negrych is leading the entire IL in slugging, OBP, average, OPS, all that stuff. Jim Negrych! Who know he had it in him? Crazy.

Also, to comment on the "two things" portion of the blog post, I've noticed that more than ever I need to subscribe to on-line newspapers to get game stories and such. I usually prefer to get my information from bloggers anyway, but now I'll be relying on them more than ever. The sad thing is that there aren't many IL bloggers, although there are some team blogs that cover "the minors" in one post. I'm hoping to get some to develop this season. Not likely, though, damn it.

two things:
1. Michael Mroziak: "Once Buffalo got its lead back, the Bisons put the game out of reach with two home runs to right field. The first one, by Luis Jimenez in the bottom of the seventh inning, cleared the right field party patio and left the ballpark. Velez's homer landed in the same party patio, bringing the final two runs home." Party patio! Where can I get one of those?

2. Evidently, Claudio Vargas retired from baseball back in 2011 when he was in the Rockies org.

3. Doug Smith has a great story on Jim Negrych: "Then there’s the matter of his stepping into the box for Syracuse here last summer and half a Section erupting in cheers, provoking Bison catcher Josh Thole to ask, “Who the heck are you, anyway?” Negrych now is “not so sure that actually happened,” and isn’t sure Thole remembers, either."

4. Negrych hit for the cycle a few days ago, and I am just hearing about it now.

5.  Rick Sporcic talks about his time at a Bisons/Red Sox game: "During the 3rd Inning, Bisons CF, Anthony Gose began motioning something to me then yelling something. I had no idea what he was saying so I wandered towards CF and Gose told me he wanted the Big Glove." Cool pictures, too.

6. So remember how Bryce Brentz accidentally shot himself and I thought it was more likely he got into some kind of scuffle OR that alcohol was a factor? Pretty sure he just shot himself.

TONIGHT! Pawtucket's back in Rhode Island and playing the Columbus Clippers who are the Indians. Allen Webster will face Joe Martinez and hopefully destroy him. Enjoy!
Posted by Jenks at 12:07 PM