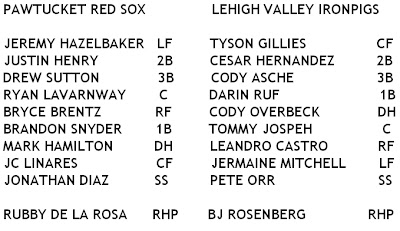 IronPigs win, 14-5. Loss goes to reliever Graham Godfrey. That's a big win, but holy crap the Charlotte Knights beat the Norfolk Tides 21-4 yesterday. Maybe I should be writing about them!

Pawtucket's starter was righty Rubby De La Rosa, who everyone is very excited about but his start was not as good as Allen Webster's. De La Rosa pitched 2 1/3 innings and let's just say his ERA is now 19.29. Two home runs were involved. Who knows what happened? All I know is that there are so many new people on the IronPigs! Except Pete Orr. Pete Orr will never die.

BJ Rosenberg started for Lehigh Valley. Rosenberg also had a bad start! He pitched three innings and gave up five runs on six hits, including a couple of home runs. So Pawtucket was up 5-2 by the second inning, but scored no further runs last night. Good relief work from Michael Stutes and Justin Friend and Jake Diekman.

The PawSox led the first inning off with a bang, getting a solo home run from leadoff batter Jeremy Hazelbaker. Drew Sutton singled himself on base and then was knocked in by the mighty Bryce Brentz, who hit his first HR of the season. 3-0!

IronPigs third baseman Cody Asche responded with a solo home run in the bottom of the second, making it 3-1. The top of the second was filled with junk like passed balls and walks and stolen bases and wild pitches, garnering Pawtucket another pair of runs. That's when their luck/talent ran out.

After scoring a second run in the second inning, Lehigh Valley exploded like a shaken soda pop in the third. Center fielder Tyson Gillies, the only 'Pig who went hitless last night, walked with one out. Second baseman Cesar Hernandez followed with single, and then Cody Asche hit a line drive double to right that Brentz couldn't get a handle on. That's because Bryce Brentz is all bat, no glove. Two runs score and De La Rosa is replaced by Graham Godfrey. Godfrey allowed another pair of runs, but finally got Leandro Castro to ground out and end the mayhem. 6-5 IronPigs.

A double, a couple of singles, and a failed pickoff attempt in the fourth inning bumped the run total up to nine for LV. And they just kept on rolling while Pawtucket gnashed their teeth and rent their garments. Chris Carpenter was scored on, Alex Wilson got a couple of outs to end the seventh, but kicked off the eighth by giving up a three-run homer before getting anyone out. Oscar Villareal was the only pitcher who made sense in this crazy, messed-up world and pitched a scoreless inning.

your only options are salad and french fries:
1. Michael LoRe has more on the bullpen's superlative work: "We needed to pick Rosie up a little bit,” Friend said. “He struggled but battled and as a bullpen we needed to get in there and eat some innings. Obviously, offensively we swung the bats well so it made it easier to attack guys.” Rosie? OH MY GOD YOU GUYS THE IRONPIGS HAVE A ROBOT MAID!!!

2. Noise Nation has everything you ever need to know about the IronPigs, including some great pictures from last night's game. I love this blog!

3. I am not going to link to this, but the ballpark in Allentown has some kind of gaming thing in the urinals that you piss on. Or something. Evidently this is very exciting.

4. Jeff Schuler, who could also set the building on fire, provides a handy roster breakdown.

5. Outfielder Leandro Castro made a great defensive play in the third on a hit by Jonathan Diaz: "But running at a full gallop from his position in right field, Leandro Castro ran the ball down just in front of the warning track for the inning's second out, and a Rosenberg strikeout got his team back in the dugout."

6.  Are you kidding me with this shit? "Cauton Flag out for De La Rosa..." reads the headline. Right there. Keep it classy, Woon/Paw paper.

7. The IronPigs now have more uniform flexibility: "Assistant minor league director Steve Noworyta said the minor league department under the direction of Joe Jordan felt it was time for give the players the option of wearing their uniforms in the same fashion as most of their major league counterparts. 'But they need to wear it properly,' Noworyta said, adding that the pants must have a 'snug fit'." HAAAAAAAAAA.

TONIGHT! Steven Wright and Tyler Cloyd at sevenish. You should go! I heard David Ortiz might be around tonight or tomorrow or Thursday night in Pawtucket. Good luck.
Posted by Jenks at 11:55 AM