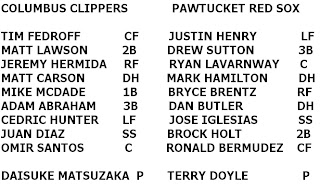 Clippers flip it and reverse it, win 6-5 like Pawtucket won 6-5 yesterday. Only with far less explosives.

Terry Doyle had a rough start, giving up five runs in 3 1/3 innings. And then he had five (count 'em!) relievers tumbling after, and no one else gave up a run except Craig Breslow, who doesn't count.

Daisuke Matsuzaka started for Columbus and he did really well... In Triple-A... for the Cleveland Indians franchise. I'm sure he's crying into his millions. Why is he even bothering? He pitched three scoreless innings. So Matsuzaka's like some minor league pitcher now riding on buses and hanging out with, like, Omir Santos.I should go talk to him.

So midway through the fourth inning, Doyle's brother was obviously not on top of things and giving up all kinds of hits and falling behind. Jose De La Torre took over and gave up another run that was charged to Doyle. And then Craig Breslow, Anthony Carter, Joel Hanrahan, and Ryan Rowland-Smith all pitched and I think Manny Delcarmen was there for a little while and then we went over to Jerry's house and everybody did a little acid. We watched him kill one of his wives and we didn't care because we were so high.

In the seventh inning, Mark Hamilton, Bryce Brentz, and Dan Butler hit consecutive home runs. And then in the eighth inning, Pawtucket was like catching up and two runners were on base with only one out, but Brentz and Butler couldn't make magic happen. Columbus reliever Preston Guilmet closed up shop in the ninth, getting the side in order. Ronald Bermudez made the last out. Oh, I forgot to tell you, Ronald Bermudez is still hanging around. I think he lives in a cabin near Presque Isle. You should see his wilderness beard.

two things:
1. I don't know where Jeremy Hazelbaker is, no. I could look it up, but wouldn't that diffuse the mystery?

2. HOLY CRAP PEDRO MARTINEZ WAS AT MCCOY STADIUM?!? No one tells me anything.

3. HERMIDA SPEAKS! "I had played here a little bit before, the wind was blowing out pretty good, I knew that it was going to be close - it's a short fence back there - I jumped up and it fell in there." - On robbing Drew Sutton of a home run. (Gobis) (I think the word you wanted to use was "peek", by the way.)

4. Which is a pretty good story, but it maybe seems to be missing a few things? "Red Sox reliever (shoulder stiffness) threw 17 pitches, walking one of the four batters that he faced in the eighth inning of his one frame of a re-hab assignment. Left-hander (tendinitis) threw 26 pitches over two-thirds of the fifth inning, walking two in his second appearance in two days Breslow and PawSox catcher would be just the second all-Yale battery mates in MLB since 1883. "I'm not quite there yet," said Breslow. "I'm getting close. At this point, psychologically, it's more important to know that my arm can hold up two days in a row." , the PawSox starter, had allowed just 22 base runners and four earned runs in his previous four starts, but walked five and was tagged for eight hits, throwing 90 pitches in 31/3 innings Six-year Red Sox family member was perfect on the pitching mound, retiring all nine PawSox batters he faced in his fifth start for Columbus, before suffering a left oblique muscle strain on his first pitch to in the fourth." Yeah, no need to name names.

Tonight it's Steven Wright, Trevor Bauer.  I will be there, doing my thing, eating some food and learning about Cuba.