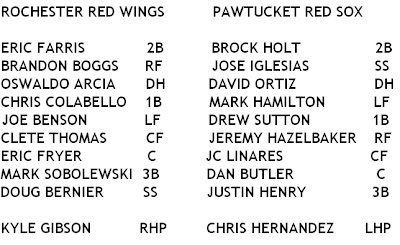 I AM NOT HAPPY WITH THE WAY THE PA SOUNDED LAST NIGHT AT MCCOY STADIUM AND THEY NEED TO FIX IT BECAUSE IT USED TO BE PERFECT.

PawSox win home opener, 5-4. Totally forgot David Ortiz was going to be there. But there he was, wearing that gray pullover thing he always wears. Also I thought that Ortiz may have played for the Red Wings because of all the time he spent in the Twins org. But today I discovered that their Triple-A team at the time was the Salt Lake Buzz of the PCL. I have never heard of this team before or could have featured its existence. My mind is blown. Can anyone prove this was an actual team that played competitively? I have never seen one piece of memorabilia or a picture or heard it mention in, oh I don't know, the innumerable amount of baseball games I have listened to or watched on television or attended or read about? I'm sorry, are you now going to tell me about a team called the Taunton Fire Jets that were the Double-A affiliate of the Astros?

And I never could have guessed that Jose Iglesias would be the first Red Sox player to hit a home run at McCoy this season. His eight-year-old twins must be so proud of their father!

Starting pitcher for the Red Wings was the rather leggy Kyle Gibson. Gibson cruised through the first couple of innings, but then Iggy homered and the whole world went topsey-turvey. Or lambsy-divey. Artsy-fartsy? Anyway, he got the loss.

Gibson's undoing came in the fifth inning, with a bunch of hits and a couple of runs. Reliever Caleb Thielbar gave up an RBI single to Drew Sutton, which was charged to Gibson.

Jose De La Torre got the win. Scoreless relief was provided by Graham Godfrey and Anthony Carter. Do you really care about the stuff in the middle?

cual e' tu vaina?
1. Drew Sutton is like jacked. Was he always that big? I've never seen him naked but it must be impressive. And Dan Butler is enormous. Also, Cookie lost a ton of weight and looks sexy and terrific.

2. I did like the Hernandez/Brandon Boggs at-bat in the third where Boggs saw a lot of pitches but Hernandez was able to strike him out.

Tonight's game was canceled due to sandstorms.