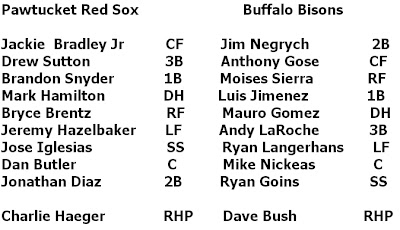 PawSox win, 8-3 in Buffalo. I have such fond memories of my baseball trip to Buffalo, with Mike Lowell rehabbing and Devern Hansack and Kyle Snyder and Niagara Falls and even though I got into trouble in Canada and had to go to Canadian Immigration because I may have been a kidnapper it was still so much fun. I should go back! Who's coming? WHO'S WITH ME?! MIKE LOWELL IS NEVER GOING TO CALL ME!!!

Sorry. Starting pitcher for Pawtucket was Charlie Haeger, who improved in all areas of a professional baseball start. Haegs pitched five innings and gave up two home runs... wait. Okay, not such a great start. My father has this goofy, waddling poodle named Charlie who like, if he wants to get up on the couch he has to build up momentum. It takes about three tries. But Charlie is so damn loveable. Do you understand what I am getting at?

Dave Bush started for Buffalo, and yes, it is that Dave Bush. Still kicking around and trying to  make an honest living. I saw him pitch when I went to Milwaukee, which was such a great baseball trip! My favorite big league ballpark, for sure. WAFFLE FRIES WITH CHEESE ON 'EM IN A HELMET.

Bush was the losing pitcher and he gave up five runs in 5 1/3 innings. I need to skip ahead to the offense because my time is restricted. I'm skipping breakfast for this! I can't stop talking!

Let's see, Buffalo was up 3-0 after two innings. Mauro Gomez and Ryan Langerhans each hit solo home runs in the second, which probably thrilled the crowd. Pawtucket scored all their runs in the sixth inning, though, so that probably shut those Buffalonians up good.

Dan Butler led the sixth inning off with a single, but then Jonathan Diaz lined out. So things didn't look too bad. Bush was still pitching, by the way. Diaz was his last out. Jackie Bradley Jr reached on an error, then everyone moved up after a passed ball. And then! Drew Sutton tripled, two runs come in, the cherry trees burst into blossom, the beasts in the sludge of Lake Erie stirred, car alarms went off... Suddenly, the maid screamed...

Next batter was Brandon Snyder. Snyder singled and Bradley scored. Tie game! Bush faced Mark Hamilton and walked him, not intentionally but maybe kinda. I wasn't there. It wasn't "officially" intentional. Bush gets yanked, Mickey Storey jogs out. Hamilton talks to first base ump Brad Myers, maybe a little to Luis Jimenez. Game on! Storey gets Brentz to fly out, but then gives up a three-run homer to Jeremy Hazelbaker. 6-3 Pawtucket! Next up, Jose Iglesias. Iglesias singled and then Dan Butler hit a home run to center, sealing the deal for the Red Sox.I'd like to seal his deal, if you know what I mean!

two things:
1. I loved Mauro Gomez on the PawSox. Here's what Buffalo's Luis Jimenez had to say about him: "Sometimes when you come from another team and you see them you want to beat them so bad. You want to be anxious and do some stuff. We told him be suave, be easy, relax at home plate and let the ball drive. ... He’s relaxed right now and letting the ball drive. He’s not doing too much.” Rodney McKissic, Buffalo paper.