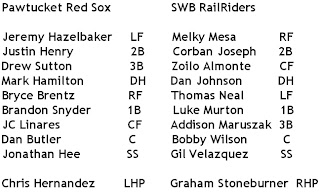 Pawtucket wins 7-2, and shares the best record in the IL with Buffalo, Louisville, and Gwinnett. The Red Sox gave no quarter to the RailRiders, who might have probably kind of wanted to win at least one game at their home opener series. Now all anyone will remember is how bad the traffic was. That ballpark is cursed!

Your capable starting pitcher was Chris Hernandez and his rare, beautiful left arm. Hernandez evidently struggled with command/location, throwing 81 pitches through four innings and walking all the fat kids on the RailRiders. Hernandez gave up two runs on four hits, but only one run was earned. That's because Jonathan Hee made two errors. Some people compliment Hee's fielding, but I am not like all the other girls. I compliment his diction and erudition.

Starter for Wilkes-Barre was Graham Chappell Stoneburner, who has a name like that because he is from Virginia and descended from plantation owners and v. old money and Founding Fathers. Like Cla Meredith! Stoneburner, who has probably never gotten high in his life, pitched four innings. Pawtucket must have liked him alright, they scored three runs off him.

SWB scored first, in the bottom of the second, when shortstop Gil Velazquez hit an RBI single. The Red Sox responded with authoritah in the third inning, though, when center fielder JC Linares led off with a single to center. Linares, an unlikely center fielder if I ever saw one, advanced to second base on a wild pitch. Dan Butler, prototypical beefcake catcher and wearer of underpants, hit a line drive double to right like a good, strong boy.

Stoneburner struck out Hee, but walked Hazelbaker and gave up a single to Henry. Drew Sutton was faced with a bases loaded sitch, but instead reached on an attempted force that scored Butler and Hazelbaker. 3-0 Pawtucket!

Ninth inning, Jim Miller pitching for the Scrankees. Miller got Bryce Brentz out, which is no mean feat considering what a killer series Brentz has had. But Miller walked the next three batters so Jonathan Hee could hit a grand slam.

Come on. Hee? Grand slam? It was really Hazelbaker, who blasted one over the fence in left center. I thought fences were supposed to be horse high, pig tight, and bull strong. Isn't that what they say on the farm, J-Bakes?

two things:
1. This game came in just under three hours!

Also I helped make ice coffee cupcakes and even though a lot of people prefer cookies I have to say these were celestial.

Have fun and I will see you tomorrow.