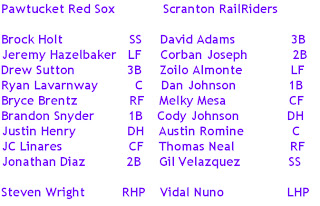 Pawtucket takes the first matchup of the series, winning 8-4 in ten innings in a long, cold ballgame. The W goes to Alex Wilson. And hey, look! Gil Velazquez!

Starting pitcher for the Red Sox was Steven Wright, the guy from last year who is known for two things, and I'm not talking about tits or testicles. Wright pitched four innings and gave up two runs on four hits. He walked four, struck out five, threw a wild pitch, and 46 of his 82 pitches were strikes.

Starter for the RailRiders, who are the Yankees and who also have a compound word team name with a cap in the middle (Like the IronPigs!), was Vidal Nuno. Nuno went a little deeper than Wright, pitching four innings and then getting a couple of outs in the fifth before ceding to beloved reliever Sam Demel. Nuno gave up two runs on three hits, including a two-run homer in the fifth by first baseman Brandon Snyder, who says crap like "What a better way to spend Easter then to drive across gods beautiful country!!!".

Scranton drew first blood last night, scoring a pair of runs in the bottom of the first thanks to Wright issuing a brace of walks and a donation of hits. Wild. But Wright settled down and kept the RailRiders scoreless through the rest of his outing.

Pawtucket tied the game up in the fifth when Bryce Brentz doubled right before Snyder's home run. After the pitching change, second baseman Jonathan Diaz drew a walk and stole second. Shortstop Brock Holt hit an RBI single and Pawtucket had the lead. It would have been more exciting if it weren't 38 degrees at that point.

SWB knotted things up in the seventh, with reliever Jose De La Torre walking a couple of dudes and setting up a sac fly situation. Good stuff, Thomas Neal. The game stayed tied through a few more innings and a slew of relievers I don't care about. Top of the tenth, Jim Miller pitching. Miller got the first out, but then outfield corn stalk Jeremy Hazelbaker hit a home run. Drew Sutton then walked and stole second, which proved to be mega-alluring to Ryan Lavarnway's big bad bat. POW! Double to right! And Sutton runs home.

Bryce Brentz! Brentz followed Lavarnway's double with one of his own, which is no surprise because when you're at a restaurant with Bryce he's always like, "That sounds good! I'll have the same except no onions!" Lavarnway scores, and it's 6-3 Red Sox. Cool, right? Not cool enough, according to Justin Henry, who went ahead and hit a home run with Brentz at second. Sorry, at third due to an error by Zoilo Almonte. 8-3 Pawtucket.

Anthony Carter came in to lock it up in the tenth, but he wound up walking everybody and allowed the Yankees to score a fourth run. But then Carter struck out the big guys in order: Dan Johnson, Melky Mesa, and Cody Johnson. I hope it hurt like hell.

3. New! Renovated! Ballpark! Come early, or you'll have to park a half mile away: "My advice would be to get here early, because it's a hot ticket this year," Mr. Ruby said. "Parking is no different than years past, though." Whatever you say, Mr. Ruby. Also, noted asshole Reggie Jackson was there.

4. Corban Joseph is so smart: "“I don’t necessarily think we lost steam (after the first inning) I think the pitcher just figured out what he was doing wrong. The whole team just went in there trying to put quality at-bats together and we just didn’t get as many quality at-bats back-to-back I think.”

5. "If Nuno was on a pitch count I have to imagine they’re saving him for something, right? He was pitching a lot in the spring already, so it shouldn’t have been necessary." - commenter Jason Cohen on Pinstriped Bible

6. Is it too late for a SWB team preview from Tamar Chalker? NEVER!

7. READ THIS: Donnie Collins talks to players about their feelings for the renovated ballpark.

8. Yes, it's true: Dan Johnson and Cody Johnson are married!

Time's up already? Zounds! That's what I get for slacking and not even really knowing half of these PawSox guys. So embarrassing. Anyway, tonight it's Allen Webster and Dellin Betances. See you tomorrow!