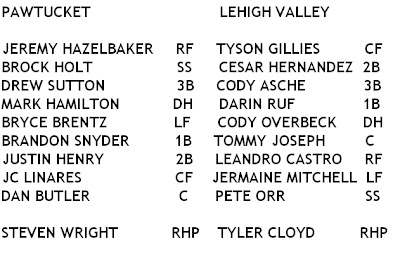 5-1 Pawtucket. Steven Wright gets the win and Lehigh Valley righty Tyler Cloyd smarts from the loss. Cloyd only had one loss in 26 minor league starts last year, but is kicking off the 2013 season 0-2.

Wright pitched six innings and gave up one run on six hits. He struck out six and walked three. Relievers Pedro Beato and Anthony Carter went on to pitch scoreless relief for the PawSox, allowing only two hits between them.

IronPigs starter Tyler Cloyd gave up all five Pawtucket runs during his five inning appearance, including a two-run homer off the bat of first baseman Brandon Snyder in the second inning. Snyder had a productive game and went on to hit an RBI double in the fourth.

Left fielder Bryce Brentz continued his hot streak, hitting a line drive single to left in the fifth inning that scored two runs. All of Pawtucket's production came from the bottom half of the lineup, with zero hits and zero RBI coming from the first four batters, including leadoff man Jeremy Hazelbaker. 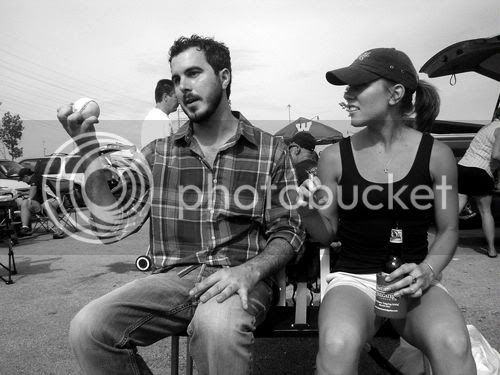 ferrous:
1. IronPigs manager Dave Brundage had a bad feeling about his team facing a knuckleballer: "We probably won't score any runs tonight and have a whole different lineup tomorrow."

2.  Basic stuff on Brandon Snyder: Drafted first round by the Orioles in 2005, lived in that organization until Jan 2012, when he was traded to Texas for cash considerations. The Rangers released him during spring training and Boston snapped him up. Snyder's played on the Tides before, so you've probably seen him at McCoy Stadium. Or in Norfolk, if you happened to road trip down there.

TONIGHT. Allen Webster versus righty Jonathan Pettibone and his effective changeup. And then tomorrow's the Pawtucket home opener, oh my god, are you ready? Do you want to talk about it?

Hope my game recap was dry enough for you. It's long been my dream to be a generic corporate conformist sportswriter.