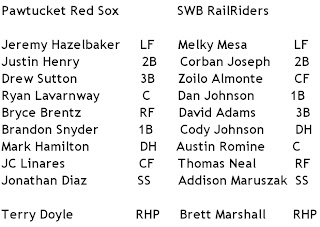 Pawtucket wins again 6-2 and they want everyone to know they're looking for a good time. They gave you their heart and they tried to make you happy... And you gave them nothing in return. Win goes to Terry Doyle and Brett Marshall takes the loss. Marshall then cut it up and distributed it amongst the poor.

Doyle was the Pawtucket starter and he pitched six and a third scoreless innings. Scranton wasn't hitting much yesterday and they only managed a single off Doyle. He struck out five of those guys, though. Walks? Also five, but who's counting?

Brett Marshall strutted out to the mound for the RailRiders, probably wearing one of those cheesy FDNY caps. Marshall pitched his little heart out but sputtered in the middle of the fourth inning and had to be replaced by Sam "The Law" Demel.

So let's relive Marshall's agony! After a scoreless and probably zippy first inning, the PawSox got the first run of the game by way of a Mark Hamilton ground rule double that scored Ryan Lavarnway. Alright, Ha - I mean, alright, Mark!

Later, in the third inning, shortstop Jonathan Diaz led off with a ground ball single to third, which Marshall deflected when he maybe should have STAYED OUT OF IT! Marshall, possibly having a significant emotional reaction, walked the next two batters to load the bases. Drew Sutton approached the plate and I can't tell you how thrilled I am that Sutton's returned to Pawtucket. I have so many fond memories of the time Sutton fielded that one ball... Or all the times Sutton had an adequate plate appearance. And I can't help but smile when I picture Sutton in the dugout... With pants and a cap... He was just a kid!

So third baseman Drew Sutton hit a sac fly to left. Things became incrementally more interesting after that, because Ryan Lavarnway hit a two-run single. And then Bryce Brentz, hottest guy on the Pawtuckets, hit a double that scored nobody but still counted for something.

(Just so we're clear, I mean that Brentz is hot with a bat. Not in the face. I mean, I'm sure he's reasonably attractive but it's not like I going to start a separate blog with lots of pictures of his pants and his mouth and his arms and then talk about what a whore his girlfriend is and how he could do much better. Bryce Brentz is hot with a bat, but not in the pants, is what I'm saying here.)

Had enough of Brett Marshall? He's not finished yet. Marsh (he said I could call him that) started the fourth by walking center fielder JC Linares. He struck out Diaz, but gave up a single to Jeremy Hazelbaker and a double to Justin Henry. Marshall's last order of business was to get Sutton out, which he did! Demel maintained a poker face as he ran out of the bullpen and got Lavarnway out to end the inning, but another run for the Red Sox made the score 5-0.

There was a great deal of simmer-down in the next couple of innings again, but the merciless serpent that is Pawtucket struck again in the seventh inning. New Scranton pitcher, Josh Spence.Spence got the first couple of outs, but then Brandon Snyder doubled and Mark Hamilton drove him in. Looks like Hamilton kicked 100 percent of the Yankees' ass! 6-0.

The RailRiders scored a run apiece off relievers Ryan Rowland-Smith and Nick Carter... Excuse me, Jimmy Carter. But whatevs, no chance, and Melky Mesa made the last out and that's what he gets for beating up on the PawSox last summah. 6-2 and the Yankees' heads on pikes. Nice work in Moosic, PA.

it's okay to be a ghost. it has its pleasures.
1. I'm sure JC Linares is a decent center fielder, but he doesn't seem to have the build for it. He's like an upside-down bowling pin. Don't you want someone lean and lithe out there? Remember Jonathan Van Every? It's gazelles like him you want chasing balls down, not an inverted Christmas tree.

2. At least Brett Marshall is in touch with his feminine side: "Received an awesome valentines day gift box full of chocolate and a new coach wallet from my awesome girlfriend! Love you" Haverford much?

3. "A fireworks show at PNC Field led to a brush fire behind the stadium after Saturday night’s Scranton/Wilkes-Barre game." - I told you that park was cursed!!

4. Donnie Collins, one of my sportswriting heroes, gets on top of Brett Marshall: "On paper, Marshall is a smallish right-hander whose fastball sits at 91-92 mph, who relies on command and getting groundballs, who has a fine change-up and who is still working on his slider. That makes him like a lot of guys in the minors. What separates Marshall, though, is his knowledge of hitters, his knack for pitching."

5. More Donnie Collins: "In the series, the RailRiders were outscored, 30-12, by the defending Governors' Cup champions. Even though the season is just four days old, the RailRiders say they can't dismiss as a product of a small sample size what has become simply a bad start.
"There's really no other way to look at it," third baseman David Adams said. "Is it frustrating? Absolutely, it's frustrating. What makes this game fun is winning and producing. And right now, we're doing neither."

6.  "The RailRiders managed only four hits all day, none for extra bases. Mesa, Almonte, Neal and Maruszak each picked up one hit. They were 2-8 with runners in scoring position. Mesa, Johnson, Romine and Neal each struck out twice. Brett Marshall had a rough day. He lasted just 3.2 innings, giving up five runs on six hits, four walks and four Ks. Preston Claibrne pitched a perfect ninth inning, picking up one K." - Tamar Chalker

7. Matt Ferenchick has good things to say about the remodeled ballpark! "And now without the upper deck, it just feels more like a baseball stadium. The old stadium never used to have seats behind the outfield wall. While there are still no seats there, they plan on opening it up for lawn seats later in the season, which should further improve the atmosphere. Old PNC Field used to just be a pile of seats with baseball played in the middle. Now it feels like a baseball stadium."

There's almost no local coverage of this sweep, which is so fucking stupid I can't bear it. I did see Ludwig Von Schwechheimer and Mike Tamburro on TV yesterday afternoon on some local business program, so that was fun.

By the way, I listened to quite a bit of these games on the radio to get a feel for the new guys. I think I prefer Bob Socci, since he's a little more laid back. He's from the Vin Scully school, I feel. Jeff Levering knows his stuff, but he can't help himself from ejaculating about baseball minutiae. Also he's got a somewhat outdated slickster announcer voice. But we'll see. I think overall I like both guys but right now I feel like I'm driving down the Atlantic seaboard and listening to whatever game I happen to receive on the radio.

TONIGHT. Pawtucket's in Allentown to face the IronPigs! This should be fun. Rubby De La Rosa starts for Pawtucket, BJ Rosenberg for Lehigh Valley.