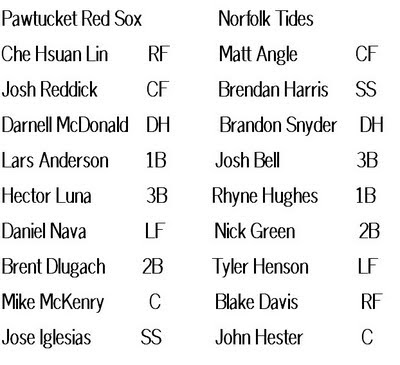 Hey, Tides win again 4-2. Pawtucket starter Felix Doubront took the loss, pitching 5 1/3 innings and giving up three runs. Without love, where would he be now?

Norfolk starter Jason Berken pitched five innings. Pawtucket got him for both of their runs, which came in the third inning. Mike McKenry led off with a single, which Jose Iglesias followed with one of his own. With Che-Hsuan Lin at-bat, Berken threw a wild pitch, advancing the runners. Lin's response was a line drive single to right, scoring McKenry. A sac fly by Josh Reddick scored Iglesias.

Clevelan Santeliz gave up the fourth run to the Tides in the eighth inning, but the Red Sox would have lost anyway, right? Lars Anderson led the top of the eighth off with a double. Daniel Nava followed with a hard hit line drive, but it was deflected by Blake Davis at first and snatched up by second baseman Nick Green, who threw it home to get Anderson out. Blake Davis! The irritatingly adept Davis also drove in half of Norfolk's runs.

nauticus:
1. Darnell McDonald got himself caught in a rundown in the first inning after he singled. Too bad, because Anderson was batting next. Except he struck out in the top of the second, so never mind. It was fate. Up against Anderson's will.
2. Daniel Nava went 4-4. Hector Luna and Brent Dlugach both went 0-4 with 2 K's.
3. No hits or anything for Matt Angle. Well, he did walk in the eighth inning, so he can take that to bed with him tonight.
4. Evidently I have something in common with Baltimore's Brian Roberts, as he is a "blogger". In this installment, he talks to Tides starter Jason Berken about working out. And sports. And woman's reproductive rights.
5. More Jason Berken talking about football. Stop being so schticky, Berken! Did you know that he's pitched for the Orioles, but they used him as a reliever?
6. There's a fat guy lurking inside Jason Berken.
7. More Berken video. Cut it out! You're gonna make me develop a crush!
8. Awwwww.
9. "Joe Posnanski has awarded Jason Berken his "anti-Cy Young" award, noting that "Basically, the whole league was an MVP candidate when Jason Berken was on the hill." - How dare you!
10. Former Pawsox pitching coach Mike Griffin helped Berken slow it down. Yeah, nice and slow. Just how I like it.
11. Jason Berken's entrance song is 'Right Now' by Van Halen. Oh my god, that's like my favorite song! We have so much in common.
12. "When Jason Berken was sent down to Norfolk, Orioles’ manager Buck Showalter remarked that Berken may have been “too strong” for his own good this season." - Oooh... Berken is so strong. Just a big, strong man.
13. One look in your eyes... And there I see... Just what you mean to me...

Tonight! More Tides. Is Jason gonna pitch again? I mean, I don't care or anything... Whatever, I like Pawtucket, okay? Matt Fox, yeah!

Here and now... I promise to love faithfully...