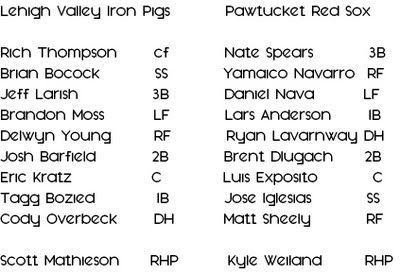 Both runs were scored in the third inning. Exciting youngster Cody Overbeck hit a solo home run with one out. Center fielder Rich Thompson followed that with a double. Reliably disgusting third baseman Jeff Larish hit the RBI single that brought the score to 2-0. And then it was all pitching for the rest of the game. Mike Zagurski and Michael Schwimer pitched two scoreless innings apiece.

Kyle Weiland took the loss for Pawtucket. His record falls to 5-6. Jason Rice, Franklin Morales, and Randy Williams cruised through the rest of the game, allowing no further runs to score. Randy Williams should pitch more.

ride like the wind. fight proud, my son:
1. Dlugach, Lavarnway, and Nava all hit doubles.
2. Nava is batting .487 over the last ten games with a 1.186 OPS. For the month of June overall, he's batting .426. So if you're a big Daniel Nava fan or if you're his mom/wife/father/high school coach, you should be proud.
3. It was Scott Mathieson's first non-rehab start since last September 2006, when someone squeezed his nuts with a waffle iron. Or he had two Tommy Johns. I forget which one.
4. Hey, it was little Cody Overbeck's first Triple-A home run!
5. Weiland left the game with a minor leg cramping situation. Please enjoy Terry Nau's Pawtucket story.
6. Video with Mathieson talking bout his lisp and his diabetes. What, no rickets?
7. Mathieson played for Canada in the WBC.

Tonight! Pawtucket's in Kentucky! Pawtucky! Kentucket! Yeah. Matt Fox will fly in the face of Tom Cochran. The other Cochran, the one who's a pitcher. I know you're tired. I'm tired too. But try to make it through the day, please?