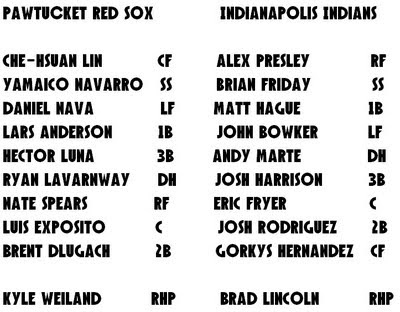 I have to get Kyle Weiland out of the way. Weiland gave up two earned runs through five innings. Bo-RING!

Indianapolis start Brad Lincoln also pitched five innings, but it was considerably less dull. Lincoln... Is that the guy with the cowboy boots? Questionable fashion sense? Lincoln banged out the PawSox in order in the first inning, but the second inning was a humdinger. With two outs and a full count, trendy buzzword Ryan Lavarnway hit a double. A subsequent single by Nate Spears scored Lavarnway, putting up the first run of the game.

Exposito took a base on balls after the run scored. Spears stole third base, thankyouverymuch. And whatever you think happened when Brent Dlugach came to the plate, you're wrong! Dlugach hit a line drive double to right, sucka! Nate Spears scored, 2-0 R. Sox.

Che-Hsuan Lin could not have been anything but impressed by the two-out magic. Lin swung at the first pitch, but took the next one for a ball. And then Lin hit a soft fly ball to center, scoring Exposito AND Dlugach. Riverdale stomp, baby, let's go!

But, uh-oh, Indians coming hard in the bottom half. Center fielder Gorkys Hernandez hit a two-run double. But Weiland got Alex Presley to hit an infield pop-up for the last out, so Hernandez never made it home.

Lavarnway doubled again in the fourth inning, sort of, but he tried to make it to third... Mistake. Catchers don't hit triples and that's a fact. Unless you're Tim McCarver and who wants to be that guy?

Indianapolis sprinkled a few runners onto the bases in the bottom of the fourth, but Weiland didn't fall to pieces and once again Alex Presley got the last out.

Pawtucket, top of the fifth, Lin singled to right with one out. But when Yamaico Navarro was called out on strikes, he groused enough to get ejected... Then Arnie Beyeler was ejected... Real mature stuff. Hot lava Daniel Nava kept a straight face during these proceedings and hit an RBI double. 5-2 Red Sox.

Hideki Okajima pitched the sixth and seventh inning and the Indians could not gets hits off him. It's weird to think of Okajima doing that kind of 6-7 inning relief. But here we are in triple-A, where down is up and no one pitches like a normal human being. Indianapolis reliever Steven Jackson... Okay, wait, wasn't he a reliever on the Bats? YES. And I cannot believe I remember that. Normally I do stuff like put ice cube trays in the microwave.

Jackson pitched a couple of scoreless innings, but in the eighth inning, Donnie Veal got fucked out of his strawberries. Anderson walked with one out and Hector Luna considerately hit a sharp ground ball to left, winding up on second base. Veal IBB'd Lavarnway to load the bases and got the second out when Spears popped up (infield fly rule!).

Pitching change! Cesar Valdez in for Veal, just to get one little out. Exposito, how hard is that? Valdez walked Exposito, scoring Anderson. And then he walked Dlugach! For realsies? Dlugach is so easy to strike out, Valdez! And, hey, look, it's Che-Hsuan Lin again! Lin doubled, absolutely, grounder to left, cleared the bases. Totally heroic. Very, very macho. 10-2 Pawtucket.

Valdez kept on walking people in the ninth, putting Nava and Luna on with a mess o- balls. Poor kid. An error got Nava home and Valdez was finally replaced by Justin something. Jared Hughes, sorry. Spears grounded into a force, Luna scored. 12-2?

Blake Maxwell gave up a couple of singles and a walk in the ninth, the Indians scored a third run, but he put the baby to bed after a lot of fussing and wailing. not the tidiest inning, but that's Maxwell.

i'll stay at home and watch the runway lights:
1. Brad Lincoln's getting called up. He's the guy with the tight jeans, right? Alex Presley's going up, too. Nice work, Pittsburgh.
2. Che-Hsuan Lin went 3-5 with 5 RBI. I hope he remembers last night forever. Perhaps someone can put together a little montage set to Expose's 'Come Go With Me'.
3. Here's the Indianapolis paper's game story. It's always a treat to see the opposing team's city's headlines. For example, the horrific "Family supported after 2 boys die in car trunk." Indiana, please explain this to me.
4. Sellout crowd last night at the Indians' park! Someone once sent me a postcard from there and I keep it in my car to examine when I'm stuck in traffic or driving at a high rate of speed. Now I really really want to go.

I like it when the minor and major teams play each other simultaneously. This concurrence will not happen again in a hundred years, so let's dig it! And I hope you read the superlative Tim Wakefield story in the Providence paper. Here's the link... Read it right now. NOW! Put the bagel down!

Tonight! Lefty Garrett Olsen will try to defuse the sizzling bats of Nava and Navarro and Lin, I suppose. Matt Fox goes for the Red Sox.