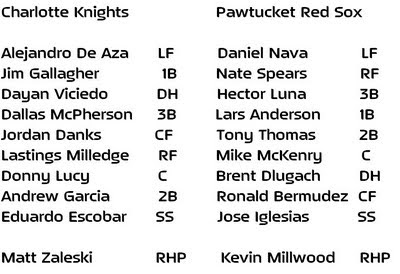 Millwood pitched five innings and gave up a homer to Lastings Milledge.

Daniel Nava hit a home run in the first inning to put Pawtucket up 1-0. The Red Sox scored their second run in the third inning, when Anderson grounded into a double play. There was probably a runner at third at the time. I have no way of knowing. I'm very busy with these important documents, you see.

Knights starter Matt Zaleski wears his loss like a crown of thorns. Zaleski threw 105 pitches through six innings, so what does that tell you? He perhaps could have used the sweet comfort of liquor and strippers.

Randy Williams and Jason Rice pitched a pair of innings apiece and kept Charlotte down. When they're not pitching, Rice and Williams are detectives! One's a cool dude from California, one's a tobacco-spittin' bowhunter in cowboy boots. The latter would be Jason Rice. A lot of people don't realize how handy Rice is with a crossbow!

daniel nava is untethered by relevance:
1. "With one down in the third inning and the bases loaded, Lars Anderson grounded a ball sharply to first base. Charlotte first baseman Jim Gallagher fielded the ball, stepped on the bag and threw to second base where the tag was applied to Hector Luna who started on first base to begin the play. Before the tag was applied to Luna, Nava crossed the plate for the second run of the game, but Anderson was not credited with an RBI because the run scored on a double play." - There, are you satisfied?
2. Matt Zaleski started the season in double-A Birmingham. No, he is not young and developing. Zaleski was demoted!
3. Zaleski is the son-in-law of Bart Berns. What, you have no idea who Bart Berns is? What the hell is wrong with you?
4. This was Mike McKenry's last Pawtucket game, because he's been traded to Pittsburgh for a bottle of air. Geez, I feel like I never really got to know him. And Paul Hoover was released, which no one told me about. You guys are assholes, you know that?