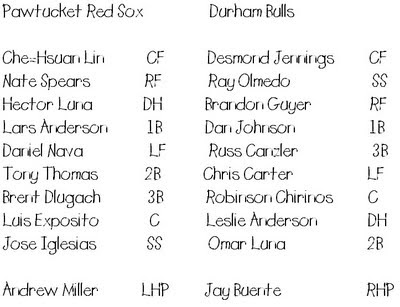 Okay, let's do this. Pawtucket wins 6-3. Win goes to Andrew Miller, who pitched six three-run innings. Miller threw 100 pitches! About time someone got stretched out! Miller did not walk anybody, but he got nine strikeouts.

Jay Buente got the start for Durham and was responsible for all six runs. Top of the first, leading off... Che-Hsuan Lin, who reached on an error and stole second. Hector Luna singled to left and Che-Hsuan Lin scored. Luna made it to second on the throw, probably because the left fielder sucks and has no defensive game. I don't know, I wasn't there.

Lars Anderson followed Luna's single with one of his own, getting Luna across for a second run. 2-0 Red Sox!

Pawtucket struck again in the third inning, when Iglesias led off with a walk. When you issue a lead-off walk to the number nine hitter, you'd better get it together. Man. Lin singled and Nate Spears doubled to right to add another run. With two outs and runners on second and third, Jay Buente walked Daniel Nava intentionally. It's going around town that Nava's been hitting a little lately, huh? But how can you not take Tony Thomas into account? Thomas singled to left and Lin and Spears both scored. Damn, that left fielder can't get anyone out at home, can he?

Durham started the bottom of the third down 5-0. Catcher Robinson Chirinos (If your first name is 'Robinson', you're probably a catcher.) led off with a triple! A catcher hitting a triple? What's next, a talking banana?

Chirinos scored on a fielder's choice. A couple of force outs and singles later, it was 5-2. Pawtucket picked up their sixth run in the fifth inning, when Anderson hit a solo home run. Lars Anderson is angry! He hates being labeled, man! YOU DON'T KNOW ANYTHING ABOUT HIM! LARS SMASH!

Durham scored a third run in the seventh when DH Leslie Anderson hit an RBI double, but Okajima and Michael Bowden held the lead, kept the Bulls from scoring the rest of the ride home. And that's it... I am officially a Michael Bowden believer. I have completely turned around on him. I take everything back. I love him. I wish he was my son. I would buy him towels for the house, garland for his Christmas tree. I totally get it now.

In a related story, Ray Olmedo is back from the dead. Perhaps he can tell us where Wayne Lydon is.

we shouldn't kill each other 'cause it's lame:
1. It's RJ Swindle, pitching relief for Durham!
2. So much for Dlugach's bat heating up. he went 0-4, struck out every time. What a bum.
3. "Pawtucket's arrival, timed precisely to that of the cooler, drier weather, was not just a lowering of the team's temperature (the Bulls won three of four games against the Clippers) but a flattening of its energy. A pitching performance like Miller's—much better than the official record will show—will do that to you." - Adam Sobsey! I love this guy. I recommend reading his story. It's probably the greatest PawSox story I've read all year.
4. Jay Buente is a new kid on the Bulls, having just been claimed off Marlins waivers like two weeks ago. Wouldn't it be funny if triple-A teams could trade? And that the bullpen formed a quorum and made those type of decisions? And what if Gumby could play basketball? What if Gumby was a relief pitcher and his main trade adviser was Tommy Hottovy due to his business acumen? Relievers should have that kind of power! They're always the smartest guys on the team because they're having Socrates-style discussions in the bullpen, expanding their consciousness, probably eating pot brownies. Pitchers always have the best weed.
5. I have probably mentioned the 'Watching Durham Bulls Baseball' blog before, but it bears repeating. It's really good. The International League needs more fan blogging. Badly. There are other people blogging about Pawtucket, but it's all very safe and sterile and devoid of naughty words and YOU NEED ME ON THAT WALL!!!!!