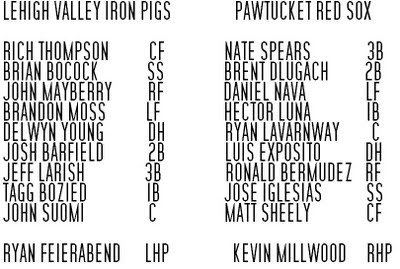 Pawtucket Teddy Bear Kevin Millwood put down his CB radio and pitched 7 2/3 large innings for the Red Sox. Shut up! Yes, it's true: 103 pitches (73 for strikes), six strikeouts, a walk and a solo home run. Great line, Millwood. Just what the doctor ordered.

Lehigh Valley lefty Ryan Feierabend was not as proficient. Feierabend made it through four innings, but not before giving up six runs on 8 hits. He balked twice, which is weird. Man.

Pawtucket's first run at Feierabend came in the first, when Brent Dlugach singled with one out and eventually scored on a Daniel Nava groundout. IronPigs left fielder Brandon Moss slapped back in the top of the second with a solo home run.

The best part came in the bottom of the fourth with game still tied at 1-1. Hector Luna led the inning off with a single to left. Feierabend then walked Lavarnway to put two runners on for Exposito, who lined out. Ooooh... Clock's ticking, Lou-is!

And then, like, the two guys voted Least Likely To hit back-to-back doubles. Bermudez and Iglesias. 4-1 Pawtuckets!

And just when I thought I was over you, Nate Spears homered to right with Iglesias on third to pack on another pair of runs. The very next inning, with reliever Justin De Fratus taking over for Feierabend, Pawtucket scored another two runs, partially thanks to an RBI double by Exposito. Exposito, coming alive!

Jose Iglesias hit an RBI single in the fifth some time after Exposito's double to bring the score to 8-1. Iglesias wound up going 3-4 with 3 RBI, so last night was his special day. Iglesias has a baby, right? Happy Father's Day, motherfucker!

Clevelan Santeliz managed not to blow the game in the eighth, getting that last batter out. Ooooh, he's just like a right-handed Javier Lopez versus Josh Hamilton! Hideki Okajima pitched the ninth and it was like watching a perfect, beautiful baby coming out of the chute on a hospital bed. Yay and such.

two things:
1. Justin De Fratus is yet another new kid from double-A Reading. Phil Lee!!!!!
2. Lars Anderson, not in the lineup. This is probably due to his bad day yesterday. Sometimes you just need to stack your money, lay low and chill.
3. For the IronPhils, catcher John Suomi went 2-3. Not much going on offensively for those guys last night. Offensive Lee!
4. "Justin De Fratus Kicks Enough Ass to Receive Ass-Kicking Promotion" - So says the 'That Balls Outta Here' blog
5. "It drives me nuts when players untuck their jersey on the field after the last out is made" - J. De Fratus on Twitter. Although I always thought that was stupid, I never realized how irritating it must be for a pitcher.
6. Brandon Moss is tied for tenth in the IL for RBI with 40. ;D

Hey, remember the IronPigs heinous inaugural season? When they led the season off with like 12 losses in a row? WHAT NOW!!!!!

This afternoon! Kyle Weiland v Scott Mathieson. I will not be attending with my father, since he never really liked me or talked to me and doesn't read my blog or anything. He did take me to a couple of Pawtucket games as a kid, so thanks, Father. I guess.