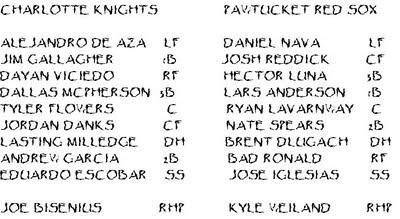 4-1 Charlotte Knights. Joe Bisenius took some time out from being on the Periodic Table of the Elements and pitched himself and, in many ways, all of us into the seventh inning at McCoy last night. So the win goes to him.

Pawtucket starter Kyle Weiland... Okay, is it me or does Weiland pitch like every third day? I feel like he's always there, being tall and being a right-handed pitcher and... He's the Notre Dame kid, right? I really don't know anything about him. Which is good, sometimes I know too much which leads to irrational hatred.

Can I call him KyWy? All four runs went to KyWy. Matt Fox was Reliever #1. Not just last night, but in his small role in BloodBall 3: The Infield Die Rule. I prefer Matt Fox as a starter. Yes, it's illogical, but don't forget I'm the one who came up with the Bullpen Quorum the other day. I'm not hemmed in by lack of creativity. Grady Little had the right idea! It's all Tim Wakefield's fault!

A bunch of shit went down in the top of the sixth, which saw Reddick and Bermudez switch places in the outfield. As in, Bermudez took over in center field. CAN SOMEONE PLEASE EXPLAIN TO ME WHY THIS HAPPENED? HELLO? I know you organizational guys are out there, reading, yet you're so stubborn and won't talk to me. Go fuck yourselves, actually. Like you're so much better than I am.

Dayan Viciedo led the sixth off with a single to center. Viciedo is only 22 years old. Take him in your arms, rock your baby. First baseman Dallas McPherson was inspired to follow that with a single of his own. Catcher Tyler Flowers sac bunted and moved the runners up. Catchers are always the best at sac bunts. I am not a huge Varitek fan, but he's a good man and he puts it down.

Weiland's next challenge was center fielder Jordan Danks. Weiland really should have struck him out in this instance, or induced an infield pop-up. That's what I would have done. But Danks walked to load the bases. Gross! Lastings Milledge came up and hit an RBI single. Goodbye, Weiland.

Matt Fox! Fox faced Andrew Garcia, who hit a grounder to center that scored both McPherson and Danks. Poor Pawtucket. This is the mystery of the quotient: Upon us all a little rain must fall. The Red Sox had eleven hits and scored one run. One. Anderson, Bermudez, Lavarnway, and Iglesias all stepped up with runners in scoring position and made the last out instead of driving someone in. They did it on purpose!

but i know that i love you so:
1. I love Maureen Mullen! Please enjoy Kyle Weiland talking about developing his cutter.
2. In the early 90's there was a song with the simple chorus of "DIANE DIANE DIANE DIANE DIANE DIANE DIIIIIAAAAAAAANE!" Viciedo went 3-5 last night. That song is not about him, but let me see what I can do.
3. "With one out in the top of the second, Reddick retrieved a hard hit ball by Danks at the warning track, a 400-foot shot. Reddick bashed into the wall on the catch and had to be tended by medical personnel for nearly five minutes. The inning ended on a double play with third baseman Hector Luna catching a line drive by Milledge and tossing over to first to get Tyler Flowers (walk) out at the bag. Reddick was okay and did stay in the game." - Steve Mazzone, Pawtucket paper. Okay, that makes sense. Sorry I got so mad earlier. I'm usually sweeter than a licorice stick.
4. ryanlavarnwaydebuttwodoublescatcherprospectlavarnwaysomethingspraychart
5. "That's going to be the trio of Chicago." So says Dayan Viciedo. I'm sorry, but weren't there like 12 people in Chicago? All that brass!
6. Is Jimmy Durkin an actual person? If there was a big computer that just churned out sports articles, its name would be J.I.M.M.Y. And I am not convinced that it doesn't already exist, devouring box scores and player stats and spitting out Staff Reports.
7. The IL's player of the month for May was Dayan Viciedo!
8. Great job, Knights relievers Anthony Carter, Tyson Corley (damn, Corley is country), and Gregory Infante.
9. "After Reid Fronk struck out to start the inning, Tyson Corley walked Cole Figueroa..." This popped up in search results. Reid Fronk? Cole Figueroa? Where did this game take place? They sound like Martians.
10. Oh yeah, Franklin Morales pitched.

Tonight! Kyle Weiland! Not really, but it's more Charlotte Knights in Pawtucket. Bill Lee is going to be in the house, also. And Jose Santiago, for those weirdos out there.

Andrew Miller will face Dylan Axelrod. It is to you I give this tune.
Posted by Jenks at 1:32 PM