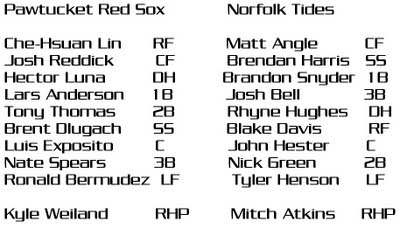 Tides take it, 4-3 in 13 innings. This would not have happened with Darnell McDonald in the lineup.

Red Sox starter Kyle Weiland pitched five innings. Weiland had only given up two singles and a walk in the first four innings, but 'round come the fifth he stumbled and led it off with a walk to right fielder Blake Davis. Catcher John Hester batted next and got on base thanks to an error by Dlugach. One of Weiland's pickoff attempts went awry, allowing Davis to score the first run of the game.

Weiland went on to walk LF Tyler Henson in the inning, putting runners on the corners with no one out. And then Matt Angle. Angle the Mauler. Angle the Slim Killer. Angle the RBI single hitter, who drove in John Hester with a soft, gentle, beautiful line drive to left. 2-0 Tides.

A balk call on Weiland advanced Henson and Angle with Brendan Harris at bat. Harris grounded out, allowing Henson to score. 3-0.

Norfolk starter Mitch Atkins kept Pawtucket off the board until the sixth inning, when a walk to Hector Luna and a single to Lars Anderson set everything up very nicely for skinny boy Brent Dlugach, who perhaps surprised even himself by hitting a home run to right. Tie game!

If we skip ahead to the thirteenth inning, you'll see that Matt Angle led it off with a single off reliever Tony Pena. Angle advanced on a sac bunt, Josh Bell was intentionally walked, Rhynes Hughes hit the RBI single. Perhaps even in that order!

Matt Angle is a real pain in the ass.

can you imagine the way i felt?
1. No hits from the hitters: Reddick and Luna came up empty. Dlugach had all the RBI, Anderson went 2-6 with a double. Tony Thomas and Nate Spears also doubled.
2. No subs for Pawtucket in this game! Everyone played the full 13.
3. Randy Williams also made a two-inning appearance.
4. It was 'Turn Back the Clock Night' at the Tides' park. Cheap food, like prices from outta time. Hey, that happened when I was there! Was that really two years ago? No way. No fucking way. I remember Rocky Cherry...

Tonight! Norfolk again, Andrew Miller, Brad Bergeson. Sorry, not much out there today about this game. I guess no one cares about Brent Dlugach.
Posted by Jenks at 7:17 AM