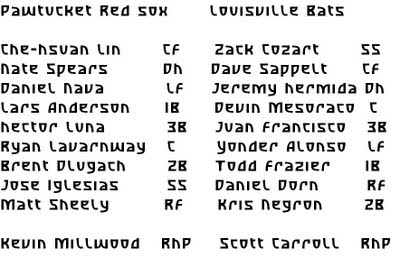 Tony Pena WINS! 4-3. And this is a fair example of the capriciousness of the 'Win' tag. TONY.

Your Pawtucket starting pitcher was Kevin Millwood and it is still pretty strange to me that Kevin Millwood wears a PawSox uniform. I haven't seen him pitch yet so shame on me. Millwood pitched six innings, giving up two runs on five hits. He struck out seven and walked three. Millwood left the game in a tie situation, so no dub for him.

Louisville starter Scott Carroll pitched himself into the eighth inning, sipping a drink and feeling fine. The Bats had a 3-2 lead. Carroll got Lin to ground out, but Spears singled so here comes a lefty. Jeremy Horst (Buchholz) faced switch-hitter Daniel Nava and got him to fly out, but Anderson hit a line drive double to right and Spears crossed the plate to tie the game.

Neither team scored in the ninth, but the Pawtuckets were not interested in a long, long extra inning game so they scored in the tenth. Nava hit an RBI double, scoring Matt Sheely. I love Matt Sheely, even though he was also caught stealing in this game.

Fly honey Randy Williams got the final out in the tenth inning after Pena departed. Todd Frazier was left hanging on second base. Someday Frazier is going to be waiting at Randy Williams' house with surgical foot covers and a hair net and gloves and shoot him dead before Williams can even put his bag of groceries down.


maybe fuck yourself:
1. Hector Luna hit his second triple of the year. This puts him in a team first-place tie with four other people. I'm confident he can pull ahead of those bums.
2. Where is Tony Thomas? I'm getting angry now. What the heck, you guys. Like Dlugach is so much better. (Hint: He is not.)
3. Franklin Morales pitched an inning and gave up a run. This game summary certainly has a lot of holes.
4. "Louisville reliever Brandon Hynick walked the first two batters in the 10th and then made a sensational play when Spears tried to bunt. Hynick dove toward the third-base line, grabbed the pop-up and quickly threw to first for the double play." - These Louisville Bats game stories are written by a different person every time. They always quote manager Rick Sweet, too. Maybe I'll write one someday.
5. Nate Spears went 3-5. Do you think he's a nice guy? Think again.
6. Tony Pena issued... Okay, Arnie Beyeler had Pena IBB both Danny Dorn and Jeremy Hermida. Dorn, maybe, he's been hot lately. Hermida? Okay... Yeah. RESPECT. Hermida was hittin' a bunch of stuff last night. LIKE YOUR MAMA!!!

Dude, I really gotta go. TONIGHT! Indianapolis Indians! McCutcheon's not on the team anymore so who cares? Fine. Kyle Weiland, Brad Lincoln. Could be cool.