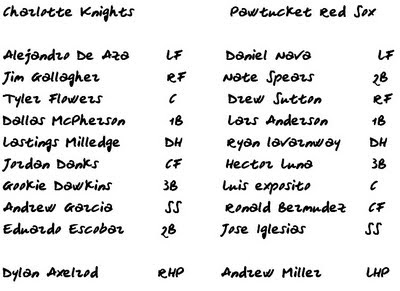 Charlotte Knights win in extra innings. I love that story.

Andrew Miller starting for Pawtucket was fine (10 K's). He is most assuredly likely to be blowing town soon, so thanks for everything. I 'Hope' you enjoyed your stay in Rhode Island. Don't worry - I am not 'anchor'-y at you for leaving!

Pawtucket was ahead 2-1 until the ninth. Okajima was pitching and Lastings Milledge led off with a bunt. He cut all his long, long hair off! Andrew Garcia hit a sac fly and scored Milledge.

Clevelan Santeliz barfed everything up in the top of the eleventh. Nate Spears was ejected for arguing a strike call. I get really irritated when players do that. You are in the lineup for a reason, so why the fuck are you acting like a jerk and getting tossed? These kids need to get over themselves sometimes.

Whatever. This game has left me dispirited. And would someone mind telling me why Tony Thomas is in Portland?

my middle name's still 'Risk'
1. Nathanial Stoltz provides a gentle, warm story on Dylan Axelrod coming from the indy league. Axelrod pitched eight innings last night, and he did it with a paltry 96 pitches. So nice work for this guy.
2. Dallas McPherson is one of the biggest first baseman I have ever seen.
3. No one cares about Hector Luna except me. He will never be a topic on any message board. Luna went 2-5 last night and in the seventh inning, threw out Eduardo Escobar at home, fielder's choice out. That's the kind of thing that would put my heart in my throat, if I were a third baselady. That throw to home for an out... So many 'what ifs'. So much can go wrong. Hector Luna was cool, though, and maintained a post-amazing defensive play face. Hector Luna is great. I wish he was my friend in real life.
4. Re: Miller deciding to opt out and his audio comments: "Note that he says all this in a very relaxed tone." Yeah, he was probably stoned.. Or he ate one of those brownies they banned in Fall River.
5. "All he eats is pizza... Pizza and the other thing, what do you call that? Pizza and... cheese. Cheese and macaroni or whatever you call it." - guy behind me last night
6. Jeremy Kapstein was present last night, as was Ryan Kalish, Bill Lee, Yamaico Navarro, and Matt Sheely. And that scout in the black vest with the crack phone, he was there. And my brother and his daughter, who hates me.

No Red Sox today. I'm wondering if I should go to Lehigh Valley in July. I'd really like to go to Rochester, but the timing's bad. The only thing is that Lehigh Valley does not look... I mean, I'm sure it's lovely... What I'm trying to say is... Never mind.

What do you think of Miller? Curious now that he's in the rotation. I'm hearing good things... but I really don't want to give up Wake...

I'm not 100 percent sure he's ready for the bigs. Time will tell.