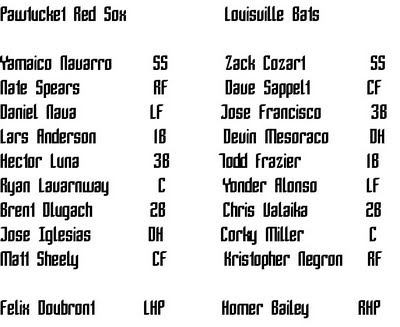 Louisville starter Homer Bailey pitched six innings and left the game with Pawtucket leading 3-2. Although the Bats scored first, hitting back to back doubles in the first, Pawtucket pulled ahead rather promptly. In the third inning, Matt Sheely singled with one out, then stole second during Navarro's strikeout. Then Nate Spears singled oh-so-gently to center, scoring Sheely to tie the game. Spears also stole second base, then scored when Daniel Nava singled. 2-1 Pawtucket, if I know my gazintas.

A walk and a couple of singles got the Red Sox a third run in the fourth inning. Louisville third baseman JUAN Francisco (not 'Jose', which is what I wrote in the lineup) hit a solo home run in the fifth changed the score to 3-2.

With Hideki Okajima pitching in the seventh inning, Francisco hit yet another solo home run, making things exciting for Louisville fans. Tie game! But fear not, Okajima, the Red Sox got their freak on in the eighth inning. With Justin Lehr pitching (Whose real name is Charles Larry?), Nava walked and stole second. A wild pitch got Nava over to third base. Hector Luna, who is your daddy, singled to center field, scoring Nava. Good night, Charles Larry. Enter David Johnson, who's also a righty so it wasn't a matchup thing. Short leash for Lehr, I guess.

Lavarnway got to second base on an error by center fielder Dave Sappelt, so I have to assume Lavarnway hit a ball out there somewhere. In all that tangle, Hector Luna scored. Dlugach drew a walk. Iglesias hit a line drive single to center. Damn, Dave Chappelle was busy last night! Anyway, this single scored Lavarnway.

David Johnson, still not having gotten anyone out, was faced with little Matt Sheely. Johnson walked him. Third pitcher of the inning come in to replace Johnson. Name of Steven Jackson. David Johnson and Steven Jackson. Catchy names. Jackson got Navarro to ground into a double play to finally end the inning. 6-3 Pawtucket and reliever Tony Pena kept it that way for the final two innings.

All that and I didn't even tell you that Aroldis Chapman pitched. Win goes to Okajima, loss to Justin Lehr.

don't let it end in sorrow:
1. Only one extra base hit for Pawtucket this game, a double by Anderson. Four stolen bases certainly helped.
2. Homer Bailey and Chapman are both rehabbing.
3. Do you think Homer Bailey looks like Christian Bale? Ummm... Maybe. Homer Bailey always seemed cadaverous and drained of blood to me. Maybe C. Bale in that movie where he's wicked skinny.
4. Bats shortstop Zack Cozart is looking pretty sexy to Cincinnati fans, since Edgar Renteria's not thrilling anyone. Cool story, John Fay.
5. And Cozart's third in the IL for doubles with 25.
6. Cozart interview from a couple of days ago.

This morning at 11:45! Brandon Duckworth will be opposed by righty Daryl Thompson. In Louisville. I can't go, sorry.
Posted by Jenks at 7:00 AM