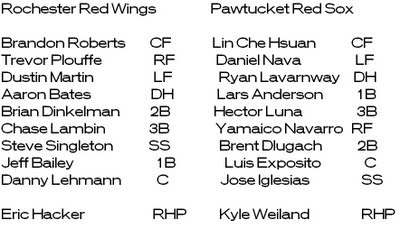 PawSox WIN! 4-1. Could this have been the greatest game I have ever attended at McCoy Stadium? And did I perhaps see this coming as long ago as Mother's Day 2010?

It was evident very early on that Weiland was gonna burn it fucking down to a cinder. Blasting K's like picking daisies. And hitting batters, although Dustin Martin, come on. It was barely a jersey-ruffler. But I must be honest - I was thinking no-no as early as the second inning. And I got really excited, natch. I have never seen one in person. Closest I came was Chris Young in San Diego, two outs to go. Because I went to San Diego. Because I won a major award.

Kyle Weiland pitched 8 innings, throwing a paltry 99 pitches. One hit, one unearned run. Twelve (12) strikeouts. What a remarkable performance. And on such a perfect, lovely evening. In the sixth inning, Weiland led it off by hitting catcher Danny Lehmann for the second time. CF Brandon Roberts attempted to bunt, but was called out on interference. Roberts was not happy about it. Trevor Plouffe flied out to center for the second out. Everything was very exciting at that point. Dustin Martin batted next, and Lehmann made it to second on a passed ball. Martin singled, Lehmann scored. Everybody applauded the conclusion of the hitlessness, much to my surprise. I didn't think most of the crowd knew what was going on.

But what about Rochester starter Eric Hacker? Hacker put in 5 2/3 innings. The Red Sox kept getting little hits off him (eight all told), but only managed two runs. This was primarily Lars Anderson's fault, as he came up four times with runners on and made the last out. His frustration was evident in the way he yanked off his gloves and tossed his batting helmet. REAL MATURE, ANDERSON.

Pawtucket scored first in the fourth, when Luna led off with a single and stole second. Then with two outs, Exposito singled... Tried to get to second, but was tagged out. Luna made it home safely, though, so it was 1-0 Red Sox.

Hector Luna was also a baseball genius in the sixth, when he led off with a solo home run. His pals behind me were delighted. Hacker got the next two guys out, but then reliever Carlos Gutierrez got called in. Gutierrez could not get anyone out. He walked Exposito, gave up a single to Iglesias, walked Lin, and then walked Daniel Nava to bring home Exposito. Gutierrez then hit Lavarnway with a pitch... I think warnings were issued, although why would you even do that of it was going to get a run across. The whole thing was hard to watch.

Gutierrez was replaced by Jim Hoey, world's tallest Rochester Red Wing. Hoey got Anderson to line out to short. 4-1? 4-1.

Michael Bowden pitched the ninth, put a couple of runners on, made me uncomfortable. Total regression for Bowden. I really had my doubts as to whether he could get the last out. Or maybe just held up against Weiland's supernova start he looked like dogmeat.

come on dudes let's get it on:
1. I nearly always sit on the third base side. Last night, I mixed it up and switched over to third. I really recommend this to McCoy regulars. Now I know what the right-handed pitchers look like.
2. But in the second inning, Hector Luna's bat came flying toward me. It was terrifying. hit the edge of the section next to me, which is not wicked close, but still.
3. Danny Nevada's continuing to tear the hotel down. 2-3 with a double and an RBI last night.
4. Hector Luna's second consecutive game with a home run is not a sentence. I love that guy, I do.
5. This story is barely relevant, but it made me laugh. Thank you, Matt Goisman. It's about the PawSox locker room and early forays into sports reporting.
6. Trevor Plouffe is really, really, really ridiculously good-looking. The ladies must love him. Not me, though. I'm above all that. I'm very serious. I have many laminated certificates and important documents.