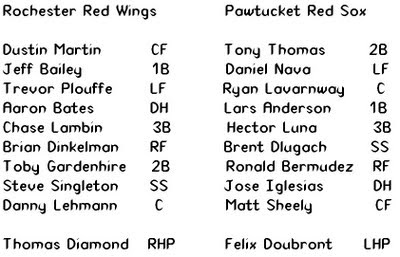 Rochester finally wins one, 8-4. Hey, what happened? The Red Wings hit the shit out of Felix Doubront, is what. First of all, Doubront threw 91 pitches, which is the most so far this season. Second of all, Doubront gave up two doubles and two home runs, including a three-run homer in the third inning by left fielder Trevor Plouffe.

Rochester scored right away in the first inning, when leadoff hitter Dustin Martin homered with a 2-0 count. Martin struck again in the third inning, when he singled to left with one out and then stole second. Jeff Bailey shimmied over to first after Doubront walked him, then Plouffe and his home run. 4-0 Rochester.

Pawtucket put a couple of runners on in the bottom of the third, but Red Wings starter Thomas Diamond got Tony Thomas and Nava to strike out. Top of the fourth, shortstop Steve Singleton doubled. And then, uh-oh, Dustin Martin and his bangin' physique hit a line drive double to right! Damn, son!

Martin made it home as well in that inning, when Bailey singled. 6-0 Red Wings. Must have disappointed the great crowd who had seats for FIREWORKS AT MCCOY STADIUM!!!

Pawtucket finally scored its first run in the bottom half of the fourth, when Lavarnway hit a solo home run. Of course! Lavarnway's productivity has been so impressive. And then Bermudez doubled to lead off the home half of the fifth. Iglesias batted him in, so that was kinda cute.

Doubront's relief came in the form of a wall of ice! Jason Rice, I mean. Rice had a calm, clear seventh but the Red Wings, who are so hungry for runs and winning and success and happiness, got Rice for another couple of runs in the eighth.

Jim Hoey pitched the bottom of the eighth for Rochester. Tony Thomas led it off with a single and a steal. Welcome back, Tony Thomas! Danny Nevada walked. Lavarnway walked, because he's not just some big beefy macho power hitter. He's got feelings, too, you guys. So that loaded the bases for Anderson, who could have grounded into a double play and no one would have really cared this time because Thomas would have scored. But he hit a two-run single which is even better. 8-4 Rochester!

But nothing much else happened after that. Handsome Randy Williams pitched the ninth inning. Red Wings won. Too bad the home team couldn't win with so many fans there to see the FIREWORKS AT MCCOY STADIUM!!!!

i've been meaning to tell you:
1. Sex machine Dustin Martin went 3-4 last night and played center field. He walked, stole a base, two RBI, etc. Yeah, it was pretty hot.
2. Tony Thomas is back, since Navarro was called up. He struck out three times and made a throwing error. Next time, Kid.
3. Thursday night I went to the park and watched Trevor Plouffe get ejected for endless bitching about the strike zone. 'Are you fucking serious?', I heard him say. Suddenly I realized... What an asshole!
4. Pawtucket added James 'King' to its roster from single-A? Evidently 'King' played a few games in Pawtucket last year. Funny, I can't remember this guy. I do remember James KANG!!!
5. Thomas Diamond was a first-round draft pick in '04. He's new to the Twins org. They signed him after he was released by the Cubs.

Side note: Hector Luna is a Professional Baseball Player. It's nice to see a guy like him in Pawtucket, and not just because of the home runs. Luna made a terrific catch Thursday night, an infield pop-up very close to home plate. Yes, he ran all the way in from third to get it. It was pretty cool.

This evening! FIREWORKS AT MCCOY STADIUM!!! And it's a double header, Duckworth and Pena. DJ Mitchell and George Kontos go for the Yankees. And this means that maybe we get our fix of Donnie Collins!!!
Posted by Jenks at 9:22 AM