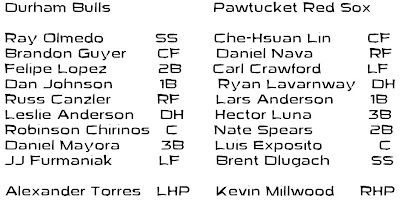 Let's bang this out. Pawtucket wins 3-2 after being steered through six innings than none other than Kevin Millwood, because Kevin Millwood pitches for the PawSox.

Durham tied the game in the third inning. Center fielder Brandon Guyer singled with one out. Guyer advanced to third on a wild pitch and a missed catch by Dlugach. Uh, oops. Millwood responded to this by issuing two consecutive walks. And then when Russ Canzler took an opportunity to ground out, Guyer scored. 1-1!

In the bottom of the fifth, Ryan Lavarnway hit a two-run homer. I mean, I could have just written that and called it a damn day. But I am committed to providing excellence at no cost to you, but at a substantial cost to me. I kinda thought that Lavarnway would have cooled off by now, but he is an animal. IN BED.

The Bulls scored a second run off Jeremy Kehrt in the seventh inning, mostly due to Ray Olmedo's double, but they left a couple of runners at the corners when first baseman Dan Johnson flew out to center. Dan Johnson is still kicking around.

Handsome Randy Williams got the save, getting the last out in the eighth with the bases loaded and then pitching a heavenly ninth. Williams struck out three batters during his brief appearance. Looks like Randy Williams is also an animal. But not in bed. Randy is a gentle and sensitive lover.

i ain't never gonna love nobody but carl crawford:
1. Read this thing about Carl Crawford. Isn't that what you're really here for?
2. Terry Nau, breakin' it down for the Woonsocket paper, which is the same as the Pawtucket paper.
3. How high was Peter Gobis when he wrote this? It's called a period, dude.

I think it is a REAL SHAME that sportswriters are overlooking Randy Williams' remarkable save last night. Well, some things are left up to the little guy and this is one of those instances. : )

TONIGHT! More Durham Bulls and Tony Pena Jr, who really should behave himself better at home. Matt Torra with no record goes for the North Carolina team. I can't go, but thanks for asking.

Not sure where that smiley came from.

Just found your blog. Like it. Can't say that I'm enjoying the games, though. Maybe tonight. Matt Torra bailed out of the Rockies organization a couple of weeks ago. Have only seen him once. I'm skeptical, but our starting pitching needs all the help it can get. 5 out of 6, so far, is too many! Time for the Bulls to at least make the game interesting. Chris, from Watching Durham Bulls Baseball.