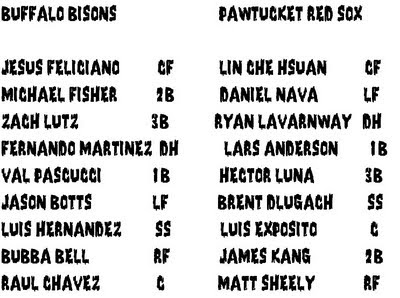 Pawtucket wins, 4-3. Matt Fox struck out seven and kept Buffalo to two hits, two runs and went home happily with the win. It was carefully wrapped in a pair of shorts and packed into his duffel bag.

Bisons starter Dylan Owen was the losing pitcher. Owen threw 76 pitches through five innings, three of which were taken deep for homers. Owen was responsible for all four Pawtucket runs. After the game, Owen sat and smoked against the wall, drank a beer, felt the chill of fall.

Pawtucket got one the board first in the fourth inning, when DH Ryan Lavarnway hit a fly ball to left... Way back! Outta here. That would be Lavarnway's sixth home run since emerging from Portland's birth canal on June 13th. And Hector Luna took it upon himself to homer as well in the fourth. Tenth home run for Luna. Only Brent Dlugach has more... No, not really. Josh Reddick still leads the team in that category, with Luna in second place.

In the top of the fifth inning, Matt Fox walked Bubba Bell. Bell stole second and dashed home on a single by center fielder Jesus Feliciano. 2-1 PawSox. But not for long! Lavarnway struck again in the bottom of the inning, hitting a two-run homer. Get the fuck outta here. Yes, Matt Sheely had been on base because he was hit by a pitch... Just like Jeff Natale!

Things got spaceship-weird in the sixth. Bisons mgr Tim Teufel got ejected by the third base umpire. I will try to sort that out later. And then with one out, Matt Fox hit DH Fernando Martinez. Maybe this was because Owen hit Luna and Sheely, who knows. Whatever, Fox was done for the day after that. Jason Rice came out from the bullpen to see what was what. Then what happened? Pascucci singled, Jason Botts doubled. Pascucci scored. Luis Hernandez hit a sac fly, scoring left fielder Botts.

Rice walked Bubba Bell and the Red Sox lead seemed imperiled, but catcher Raul Chavez grounded out to end the inning. Rice went on to pitch another couple of innings and did not allow further Mets scoring. Randy Williams pitched the ninth and got the save. Good talk, Russ.

i'd be like my dog and never give up:
1. Jason Rice has disappointed me so far. Perhaps my expectations were set too high.
2. Pawtucket's been very good lately, winning seven of their last ten games. And still 3 1/2 behind the IronPhils.
3. So... was Sheely really hit by a pitch? I think that call was questioned.
4. "Fox will depart for Utah on Monday and has finger's crossed he can provide the International League squad with at least one inning." - Ahem. MCGAIR.
5. This past January, Dylan Owen threw a seven-inning no-hitter in Puerto Rico.

Tonight! There is no tonight, there is only Thursday. But the Durham Bulls are making their annual trip to Rhode island, probably because they heard about this place. I'll be around, I promise.