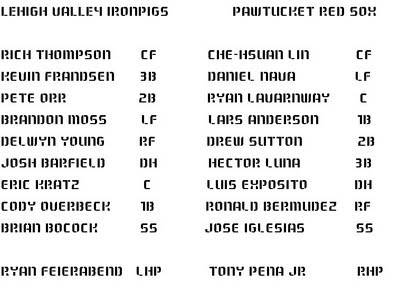 Alright, shall we? Red Sox starting pitcher was Tony Pena, who went seven innings and gave up two runs on four hits. First run for the IronPigs (sigh) came in the second inning, when Brandon Moss led off with a walk. Back-to-back singles scored Moss for the first run.

Pena's second mistake was giving something good to little Rich Thompson, who hit a solo homer in the fifth. Awww! It was Thompson's third dinger of the season.

Lehigh Valley starter Ryan Feierabend gave up hit after hit and looked to be in line for the loss when he exited the sixth with two outs. The Red Sox got two off Feierabend in the first inning when Ryan Lavarnway hit a two-run homer. Geez, Lavarnway, pace yourself! And the third run during Feierabend's gig came during the sixth, when Luis Exposito hit an RBI single. Awww, look, how cute! The other catcher's trying to get big hits, too!

Hideki Okajima skipped out to the mound in the eighth with the score at 3-2 PawSox. Easy eighth, right? No! It was awful! A bloodbath! Third baseman Kevin Frandsen and his UGLY, red-and-nacho cheese colored cleats singled with one out. Second baseman Pete Orr followed that with a double, putting two runners in scoring position for Brandon Moss,who sac flied to center. Orr scores! And then Delwyn Young, the petite right fielder, took it upon himself to knock it out of the park. Two-run homer! 5-3 Pigs!

In the bottom of the eighth, a single by Luis Exposito and a slew of sacrifice-style outs off reliever Sidney Ponson tacked another run onto Pawtucket's score, but alas. It was hopeless. The mini-Phils were just too clever by half. Justin De Fratus came in for the save and got all the outs. No sweep for the Red Sox. Good game, though.

an informal upgrade:
1. I'm sorry, did I say Sidney Ponson? I meant Mike 'Bronko' Zagurski. They look so much alike!
2. Jose Iglesias came back, didn't finish the whole game but baby steps are fine. He got two singles so that was lovely. And he executed a nice, sideways scissoring infield play in the sixth to get Delwyn Young out at first.
3. We've got lots and lots of errors! Shortstop Brian Bocock threw a ball to first and it was wicked high in the first inning. Delwyn Young found his reason to homer in the fourth. And the most ugly one of all: Pete Orr couldn't pick up the ball in the seventh.
4. Clevelan Santeliz pitched the ninth inning. I did see Bowden warming up, prancing around in the bullpen like he was Barry Zito or something. I wonder if the other relievers roll their eyes?
5. Hector Luna hit a double and a triple!
6. Ryan Lavarnway almost hit a second home run in the ninth. It was way! Back! To left by the PawSox bullpen! But then Brandon Moss somehow snapped it up. I can't even be too mad, because Moss is as sweet as they come.
7. I noticed that the visitor's dugout bat boy had to wear a Lehigh Valley jersey. The player? Jason Grilli, who just just got signed by the Pirates. Ha.
8. IronPigs manager Ryne Sandberg could not be there last night due to being inducted into the Hall of Fame! Hitting coach Sal Rende ran the show.
9. Wrong Tony, Staff Report: This article refers to Pena as 'Armas'. Sure.
10. Bacon and Biscuits game story (featuring poll).
11. Attleboro's Peter Gobis talks to Lavarnway and Exposito about being catchers and being hot. "You can't put that as an excuse, you can't bitch about the heat or the cold," sez Exposito. Good stuff, Gobis! What's an ammonia towel?
12. Big star Josh Reddick popped into McCoy on his day off to say 'hi'.
13. It was Hideki Okajima's first loss of the season. Not that he minds.
14. How much B-Mac can you handle?! I saw both guys exiting the park together. Arm in arm. They were wearing aspirational homburgs.
15. Speaking of which, here's a McGair story in which Ryne Sandberg talks about Pedroia and such. It's good stuff, but you would think the accompanying photo would be of Sandberg.

Tonight! Buffalo! Matt Fox @ Chris Schwinden in the Empire State/Canada. Leave now and you will make it.
Posted by Jenks at 6:54 AM