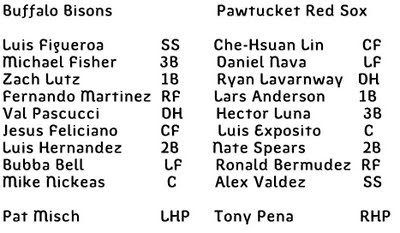 The Pawtucket Red Sox win, 2-0, in spite of Lars Anderson evidently being too stoned to catch the ball. Winning pitcher for the Red Sox was the sadly neglected Tony Pena, who acted like a man and pitched five scoreless innings. Pena gave up two hits and a walk and struck out four.

You remember Pat Misch, right? Lefty? Great dancer? Smells like desert rain? Misch didn't do too badly, but Pawtucket scored the only two runs of the game under his watch, so he's the one who took the golden L, in the tan van, and gave it to Dan who took it to Fran.

So what happened? Hector Luna doubled to left to lead off the second inning. Exposito grounded out. And then Nate Spears, who... Is back, doubled to right. And the weird thing is that Luna stopped at third. I don't get it! I would say if you're on second base, and the batter doubles to right, shouldn't you make it home pretty easily? Standard baseball stuff. And Luna's not, like, wicked slow. He steals bases! What happened? Who can I call about this?

The next batter, Bermudez, struck out. And then Alex Valdez reached on an error by first baseman Zach Lutz, allowing Luna and Spears to score. And that was it, all the scoring for the game. Tommy Hottovy and Randy Williams wrangled the last four innings out of the hands and bats of Buffalo. RAWHIDE!!!!!

just like me, only beautiful:
1. The Red Sox had two errors, both on Anderson, both listed as 'dropped ball'. And that makes him sound incompetent. But what happened in the seventh inning was that beloved right fielder Fernando Martinez got on base when Anderson dropped the ball. And then Val Pascucci, who's a super big, big ox of a man, collided with Anderson in the first base area. Anderson dropped that ball, too, but I don't think it's because he was Buffaloed by Pascucci. It looks to me like he just dropped it.
2. And now I know what happened with Luna at second! I guess when Spears hit the ball to right, Martinez kinda flubbed the catch a little on the warning track. "Luna was tagging up at second base on the play to advance once the ball was caught, so he only advanced to third on the two-base error that put Spears at second." The source for 1 and 2 is right here, no author credited. However, the official minor league site credits Spears with a double and no error, so now down is up and I don't know what to think. I should go to church.
3. Hey, look, Bubba Bell's on the Bisons!
4. Guess who pitched after Pat Misch? Big League bon vivant Miguel Batista! Batista was just signed by the Mets a few days ago.
5. Pat Misch is freaky. (with visual aids) (NSFW)
6. Lavarnway hit a double, but you are probably tired of hearing about him being good.
7. Once again, I have an excuse to play the Japanese Val Pascucci chant. It is very, very exciting. CHIBA LOTTE!

TODAY! Kyle Weiland's in Boston. I'm excited and nervous for him. In Pawtucket it's Matt Fox and Dylan Owen. You mean I can't have both?