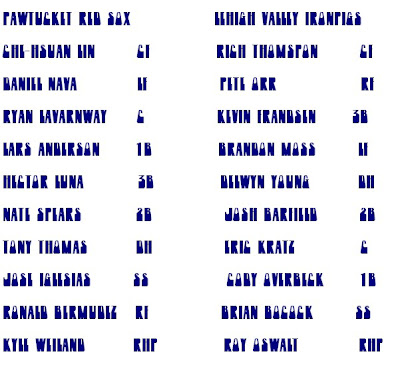 Starting pitcher for the Red Sox was Kyle Weiland, back from the void. Weiland doled out five walks in four innings, throwing 82 pitches. He gave up three earned runs, including a home run by Delwyn Young. Weiland took the loss because his teammates evidently didn't feel like hitting the ball or getting runners over. Oh, and also, Weiland hit Rich Thompson with a pitch with the bases loaded and then walked in another run in the third. Ugly.

And then over there for the home team was Roy Oswalt and his folk wisdom. They tried to make him to go to rehab and he said, why, yes, that certainly seems sensible. Perhaps Boston could spare us a little John Lackey?

two things:
1. Oswalt was behind Anderson 2-0 when he threw a change-up in for a strike and "He he put the barrel on it."
2. Lady Gaga is certainly full of surprises! She comments "Oswalt to Houston with D Brown for Pence" on Jeff Schuler's Hog Blog.
3. Tom Hinkel says there was a pitcher's duel between Santeliz and Edell. Okay.
4. I'm sure you're familiar with Charley Kerfeld, Steve Noworyta, and Mike Ondo? None of them commented on Oswalt's performance. (With video!)
5. A comment from 'The Horn and Bell': "Poor Provence… so busy with Os and Polly, he doesn’t notice Aumont came in… thought he was DeFratus!" Yeah! I know!
6. "I think my pitches looked a little different to them than Roy's," Edell said with a grin. "I'm left-handed and a little bit slower." Yes, but was it a sexy grin? And do you want a man with a slow hand?
7. I also love in the above article that there's a picture of, I think, Delwyn Young but the caption talks about Oswalt.

This morning in Allentown! Matt Fox opposed by Scott Mathieson. There had better be bloodshed. I wanna see Hector Luna show some muscle, I wanna see Ronald Bermudez get after it, I want Lin to get on base at an alarming clip. I want heavenly relief and I want Scott Mathieson to rue the day he was born a Frankenstein.

If I were playing ball this early, I wouldn't get to sleep at a reasonable hour. I would just go out and get wasted the night before. Fuck it.
Posted by Jenks at 6:58 AM