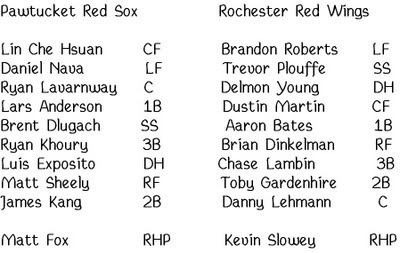 Poor Matt Fox. I believe he needs the sweet, special comfort that only a woman can give. Fox was battered like fish sticks and the Rochester Red Jerks win, 13-3.

The rehabbing Delmon Young hit a home run with Roberts on base. 2-0 Rochester in the first. It's been five years since Delmon Young misbehaved at McCoy Stadium and I can only assume he's grown and matured since then. Also, he's not teammates with Elijah Dukes or that scumbag Doug Waechter. At any rate, he's on the Twins so all's forgiven.

Pawtucket got two runs to tie the game in the top of the second inning. Brent Dlugach doubled with one out. Tasty. Dlugach stole third with Ryan Khoury batting. Khoury singled, Dlugach scored. Exposito then flew to center and... I don't have the park's dimensions committed to memory, but it was somehow a ground-rule double. So two runners in scoring position for Matt Sheely.

I forgot to tell you that Kevin Slowey was pitching, working through rehab. Didn't you used to have a thing for him? Slowey hit Sheely with a pitch to load the bases with one out. And James Kang was thoughtful enough to sac fly. 2-2!

Bottom of the second, mo' batters, mo' problems. With one out, fan favorite Chase Lambin hit a line drive single to center. And then hated second baseman Toby Gardenhire walked. Which worked out well for catcher Danny Lehmann, because he hit his second home run of the year.Lehmann went to Rice... Ever heard of it?

Celebrity asshole Trevor Plouffe also hit a home run in the second inning, bringing the score to 6-2. Please stop bleating about him needing to be with Minnesota. I KNOW, OKAY?!

Rochester really brought out the brickbats and tiles for the third inning, beating Matt Fox into a bloody pulp, spitting out pieces of his broken luck. Pawtucket really tried in the top of the inning, loading up the bases and so forth, but Chuck James, who took over for Slowey, got Exposito to strike out. Dustin Martin led it off with a home run, third of the game. Then Aaron Bates singled and Brian Dinkelman walked. Is Matt Fox okay? He got Lambin to strike out, but Gardenhire hit a two-run double. And then Fox threw a wild pitch. Makes sense.

Brandon Roberts again! Roberts hit a home run on the first pitch he saw with Gardenhire on base. It would be the last batter Fox faced. Enter Tommy Hottovy... and enter Trevor Plouffe, who greeted Hottovy by hitting his 14th home run on an 0-1 count. Ouch. Hottovy got the next batter, Delmon Young, to fly out and end the inning. Delmon has a barrow in the marketplace. Tommy is the singer in a band.

Down 12-2, the Red Sox went down in order in the fourth. Chuck James gave up an RBI single to Ryan Khoury in the fifth, which brought such shame upon his house that he left the game for Dusty Hughes. Hughes rocked the boat and got Exposito to fly out. Not hard, right?

Handsome Randy Williams, who is handsome, came in for the sixth inning. A walk and a single proved fatal when DUSTIN MARTIN GROUNDED INTO A FORCE WHICH SCORED TREVOR PLOUFFE. Thanks a lot, Randy Williams!

Kyle Waldrop pitched the seventh and Pawtucket tried but could not score ten runs. This is mostly Lars Anderson's fault, since he went 0-4 with a strikeout.

honeying:
1. The hot one is Aaron Bates. Just don't let him talk.
2. HBP: Sheely and Lavarnway by Slowey, Dinkelman by Randy Williams.
3. In case you needed to know where Slowey attended kindergarten. No way he dominated the 'Garten the way I did.
4. Hipster Kevin Slowey. From some obscure blog you've probably never heard of.
5. Ryan Khoury has certainly been making immediate contributions to the team.
6. Red Wings reliever Chuck James was bitten by a snake, lived to tell.