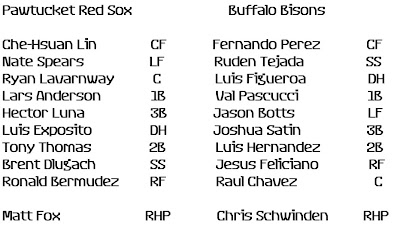 Red Sox win, 4-2. Maybe they weren't so overheated, being by the lake and all.

Before I go any further... Do you love me? Will you love me forever? Sorry. No, what I meant to ask was have you ever heard Che-Hsuan Lin's at-bat song? It's not something I am familiar with, but when I hear it it reminds me of 'Eleanor Rigby'. WICKED BAD.

The starting pitcher and winner for the Pawtucket Red Sox was Matt Fox. Fox went ahead and pitched six innings, giving up two runs on five hits, including a home run by second baseman Luis Hernandez. Fox also struck out six and walked two.

The Buffalo MC was Chris Schwinden. Schwinden got one out in the fifth inning, but since his pitch count was 111, he was replaced by Brian Sweeney. The Mets certainly do work their minor league starters, I've noticed. At least at the triple-A level. And for what?

Pawtucket first attacked Schwinden in the first inning, when hit machine Lin led off with a single. 优秀的! Lin's loving the Rhode Island summer and is now dragging his bat to Buffalo. Please don't let Boston take him away, please!!!

With Lin at first, Lavarnway hit a home run. Like, oh, oops, there it goes. 2-0 PawSox.

In the top of the third, Lin singled with one out. He was driven in by Lavarnway, who doubled to right. I was at the game the other night and before the game, Lavarnway was hugging and high-fiving and chest bumping his teammates. He looked so happy, and why wouldn't he be? Luis Exposito might as well not even exist at this school. Anyway, 3-0 Pawtucket. Or 3-1, because of the Hernandez home run in the bottom half of the inning. Yes, the old 'Hernandez Home Run'. Sounds like one of those fake sex moves.

In the fourth inning, Ronald Bermudez hit a solo home run, his third of the season.

And finally, Val Pascucci hit an RBI double in the sixth to cement the score at 4-2. What, again? Okay, fine, here it is: THE VAL PASCUCCI SONG!!!

Relievers Scott Atchison and Michael Bowden got the last nine outs in tidy, scoreless fashion. They may be southern ladies, but they manhandled that bitch. Well, Atchison may have been tripping balls, because not only did he throw a wild pitch, but he hit two batters. Whatever, it's Buffalotown, baby!

By the way, you know the best way to get everyone in a hotel lobby to turn and look at you? Carry a piping hot pizza toward the elevators! There was a good, good pizza place near my hotel in downtown Buffalo... Open late, too! I SAW MIKE LOWELL REHAB IN BUFFALO! I will never stop talking about it.

no one comes near:
1. Brent Dlugach went 0-4 with three K's.
2. Bubba Bell played in this game as a pinch runner.
3. After Pascucci's RBI double in the sixth, he tried to steal third. It would be the final out of the inning. Dude. Pascucci has not stolen a base since 2009. He is not what you would call a base stealing threat. What was he thinking?
4. Buffalo's Rodney McKissic would like to tell you all about it!
5. Brent Dlugach is back, Matt Sheely's on the DL. Right. Hey, Matt Sheely, Jeff Natale called. He wants his career back. And also, he think he may have left a roach in his locker.
6. This game was three hours and twenty minutes long. I would blame Chris Schwinden's lack of control. Not Atchison, who works faster than nearly anyone I've seen. Bowden's slowish, too...

Tonight! More Buffalo! Duckworth up against Mark Cohoon! Who? JUST SHUT UP AND ENJOY THE RADIOCAST!