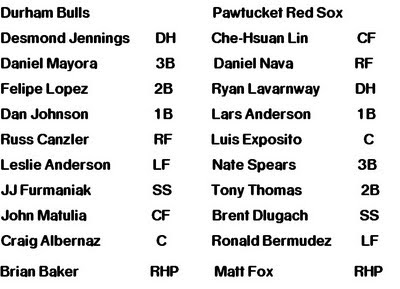 Some crazy guy I used to work with used to talk about this friend of his, Craig Albernaz, who was in the Rays org. Had I ever heard of him? No. But now, here he is. Pretty sure he is from Somerset, MA.

Starting pitcher for the Red Sox was all-star Matt Fox, who pitched his second bad start in a row. Would we say the last one was bad? I can't remember. Fox gave up seven runs yesterday. And I really don't wanna go through everything like I did yesterday, so I will merely say that I can't wait to see the back of Felipe Lopez, who evidently likes McCoy Stadium. A LOT. Lopez went 3-6 with 5 RBI. Jesus.

Bulls starter Brian Baker pitched five innings and gave up all three Pawtucket runs. Mike Ekstrom and his pals Spinner and Paddlefoot kept the rest of the game scoreless.

Durham slapped some runs up on the scoreboard in the fourth inning, which featured an RBI double by that brat Felipe Lopez and a two-run single by center fielder John Matulia. Ooh, what's prettier than a fresh-cut arrangement of Matulias? Especially this time of year!

Innings 7-9 put the Bulls streets ahead of the Red Sox. They scored nine runs altogether off Dennis Neuman and Jeremy Kehrt. Oh, by the way, Dennis Neuman is back with Pawtucket. My goodness, where has he been? Did he get caught in a Narragansett riptide? Was he on Prudence island growing vegetables? If only there were some way of knowing!

neil solondz:
1. Remember Alex Cobb, who pitched Friday? He was hit on the back of the head while playing catch before a game at McCoy. The culprit? FELIPE LOPEZ, who hit a line drive during BP.
2. I just looked at some pictures of Felipe Lopez. Turns out he's kinda foxy. And also, kind of a dick. Whatever, I still don't like that guy.
3. Felipe Lopez was on the Boston Red Sox last year. He played in four games for them last September.

Tonight! Felix Doubront v Scott Mathieson in an IronPigs adventure. Can I go back to bed, now?
Posted by Jenks at 7:07 AM