It was July 24th when it all came down. 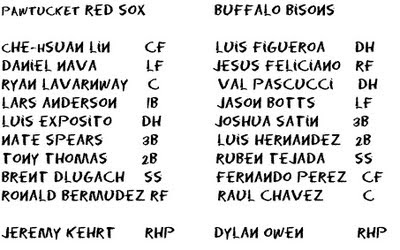 Jeremy Kehrt, an Indiana farm boy, got the start in the Felix Hole. Kehrt threw 65 pitches through four innings, giving up three runs on three hits. Mysterious righty Clevelan Santeliz jumped into the fray in the fifth inning and pitched a pair, giving up a fourth run. Hideki Okajima also wrangled a couple of innings, but it wasn't especially clean. Okajima gave up a two-run homer to third baseman Joshua Satin in the eighth.

Buffalo has precious little success against Pawtucket, and yesterday was no exception. Dylan Owen got the start. You remember Owen, right? He's the sexy one. Owen worked and worked with his 97 pitches, getting all the way into the seventh inning. He left the game with a 4-3 lead and then they brought in the lefty for Daniel Nava. A switch hitter. Nava hit an RBI single to tie the game. Blown save for reliever Michael O'Connor!

But wait! How did everything get so effed up for the Bisons? You wanna talk about home runs? Our good friend Tony Thomas hit a two-run homer in the second to put Pawtucket on the board 2-0. In the bottom of the third, though, center fielder Fernando Perez singled and stole second. Then DH and leadoff hitter and erstwhile Pawtucket scoundrel Luis Figueroa drew a walk with two outs. Right fielder Jesus Feliciano was up next and... Not sure what happened except Anderson made an error and Feliciano reached safely. Perez scored! 2-1!

But wait, more stuff happens! Val Pascucci, massive slugger, took it upon himself to hit a two run double to give Buffalo the 3-2 lead!

Luis Exposito hit a solo home run in the top of the fourth to tie the game. It was his sixth of the season. Sister Ectoplasma, she's incredulous.

Then the home run that Okajima gave up made it 6-4 with the Red Sox on the losing end.

Dale Thayer came in to close the game out in the ninth. You remember Dale Thayer? Thayer did not do his job. He did not give the other fellas hell. Ronald Bermudez led the inning off with a double. Bermudez advanced to third on a Che-Hsuan Lin fly out and scored on a sac fly by Nava. Tie game! Poor Dale Thayer.

And then things went right down the toilet for Thayer. He walked Lavarnway. Maybe on purpose, who can say? It didn't end up working out because Lars Anderson came from out of nowhere and hit a two-run homer, effectively winning the game for Pawtucket. I can never tell what Anderson is going to do during any given game. I mean, Ronald Bermudez is not too thrilling, but he is consistent. You know what you're gonna get with Ronnie. Anderson is a wild card.

Jason Rice pitched the ninth inning, keeping it scoreless and beautiful and cute.

Tonight! More Buffalo meat in a Battle of the Olds! Beatnik righty Miguel Batista will get after it v Kevin Millwood. Should be wily and crafty and veterany. I say that, but how bad do I wanna go to this game? BAD.
Posted by Jenks at 7:00 AM