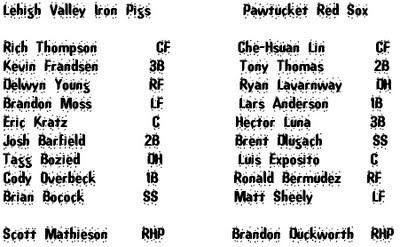 Pawtucket wins 4-1. Ryan Lavarnway is less man than raw meat with arms. I have to say that I have never seen anything like it since I started this blog back in 1999. It's nearly supernatural, like the voice of Roxane Coss.

Starting pitcher for the PawSox was Brandon Duckworth on short notice. Duckworth's a good-looking man. Very solid. Seems really normal, like he could be your neighbor. Duckworth pitched five scoreless innings with three strikeouts and a walk. On second thought, can your neighbor do that? Maybe not mine, but he mows a mean lawn.

For the Lehigh Valley Iron Pigs, we get Scott Mathieson. Mathieson's like the Maryland of state quarters. He didn't work too hard, though, not even getting that crucial last out in the third. Instead, it was lefty Ryan Edell, who's a Massachusetts guy and is effortlessly handsome in a way that makes you hate him. I mean, go take a look at this guy. Super cute.

Edell pitched pitched 4 1/3 innings and gave up two runs. Add that to the two runs given up by back-to-back doubles off Mathieson and you have four runs. I know my gazintas!

Hideki Okajima pitched a couple of scoreless innings, natch. Michael Bowden and his Persistent Itch finished off the game, gave up the only IronPigs run.

Thanks, I'm keeping it brief because it's getting so late.

memoria:
1. This game is alarmingly like one I attended on June 17th, where I was inspired to describe Edell as 'Dirty. Unkempt. Hot. Erect.' Wow, that is really unlike me. Duckworth also pitched that game AND Lavarnway hit two home runs. That was a pretty good game.
2. The Red Sox made three errors: Duckworth (pickoff error), Lin (fielding), and Exposito (catcher interference).

Tonight! More Pigs at 7. Doubront and Brian Bass will tango under the lights. Ryan Edell will be idle, so if you're into jock c. you might wanna make a run at this guy.
Posted by Jenks at 12:28 PM