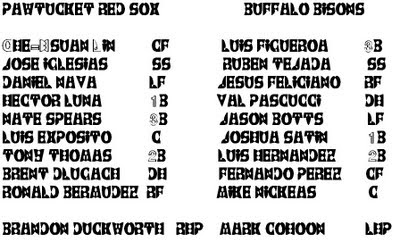 Brandon Duckworth started for Pawtucket, pitched 6 2/3, and gave up zero runs on six hits. Duckworth gets the win! Tommy Hottovy came in to relieve Duckworth, gave up the only Buffalo run. Shoot, it happens.

Starting pitcher for Buffalo was lefty Mark Cohoon. Cohoon was handling his shit, keeping the Red Sox scoreless until the sixth inning, when his empire started crumbling. Cohoon loaded the bases up with no outs for Jose Iglesias, who hit a two-run single. Jose? OUR Jose? Good job, Concussion Boy.

Iglesias scored later in the inning on a sac fly by Nate Spears. By that time, Jose De La Torre was pitching and Cohoon was likely steaming in the dugout.

Pawtucket scored their fourth run in the seventh, when Tony Thomas led off with a single and scooted around the bases on a wild pitch, an error, and a force out.

And the Buffalo run? Catcher Mike Nickeas hit a solo home run to left center. But was it majestic? I doubt it.

hot summer night, storm clouds in the air:
1. Mike Bowden closed the game out. Thanks, Elvis.
2. This game story uses the word 'multi-bounced'.
3. Jose Iglesias batted second and Lavarnway took the night off. So did Lars Anderson, except Lars Anderson was probably benched for being willful and insubordinate and annoying.
4. Why not read PawSox Blog? This guy gets up at dawn and works very hard and is very methodical and accurate and professional. He thinks he's so illustrious, he calls himself intense.
5. "...[Cohoon's]looking better and better in Triple-A but progress is moving at a snail's pace as he figures out how to make his low velocity approach work for him against more advanced hitters." Says you, Rob Castellano of 'Amazin' Avenue!'

Jeremy Kehrt's pitching today. I haven't seen his delivery, so I'm waiting for that splendid day. Buffalo will throw Dylan Owen out there, if he can tear himself away from the Aloha Pussycats.

Me? I'm going to a Fisher Cats game! Why don't you come with me? Will Middlebrooks is gonna be there...
Posted by Jenks at 8:37 AM