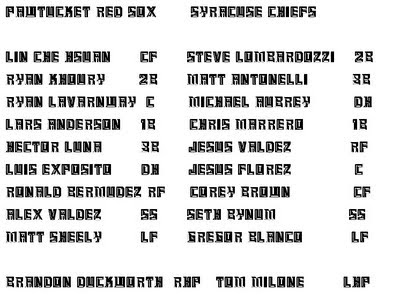 Syracuse Chiefs win, 8-2. Losing pitcher was Brandon Duckworth, winner was Tom Milone. I guess the wins just rain down when you're the IL pitcher of the week. MILONE.

Duckworth coughed up five runs through six innings, including a solo home run by designated hitter and reputed scum tinker Michael Aubrey. Duckworth's ugliest inning was the fourth, when Chiefs catcher Jesus Flores hit a long fly to right for a ground-rule double. Again, not sure on park features and dimensions, unless you want to talk about the bathroom sink. CF Corey Brown sac bunted, which was cool. Nice set-up for Seth Bynum, who singled to center. Flores scores!

Mister Jason Rice graced us all with his forgettable pitching in the seventh inning, where he gave up an RBI double to first base thug Chris Marrero. Rice didn't fare much better in the eighth inning, when he walked outfielder Gregor Blanco with one out. Blanco stole second, of course, even though his bones are brittle and creaking. Second baseman Steve Lombardozzi hit a line drive single to left, putting runners at the corners. And Matt Antonelli saw his opportunity, hitting a single to center and scoring Blanco.

Randy Williams got called out of the pen to take over for Rice. And when Marrero singled, Williams' inherited runner scored. Okay, that's enough, guys.

The Red Sox scored a couple of runs in the eighth with a combination of doubles and a single, but the team that played the worst is obviously the one who lost, so they don't deserve a reward!


Great Barrington!
1. Alex Valdez and Ryan Khoury each doubled off Syracuse reliever 'Zech' Zinicola, who I know as 'Zechry'. It's a terrible name either way. Sorry, Mrs Zinicola.
2. Tom Milone is fascinating, even though he doesn't throw very hard.
3. Michael Aubrey finished the night with four RBI, so I'm sure he hit the knees and praised the Savior, through whom he can accomplish all things. His MGR Randy Knorr says he is 'Short to the ball'.
4. Tom Milone/John Lannan comparisons. Good article, Farid Rushdi.
5. Zinicola went to ASU, was suspended indefinitely for poor grades and off-the-field misbehavior. If ASU is suspending you for being unruly, then you must be seriously out of control.
6. More good stuff on Milone from James Dunne.
7. Zinicola once hit Francisco Cervelli in the head. YES.
8. It was an Irish Style night at the Syracuse ballpark. Cool story, Bud Poliquin.
9. This game story leads off with a photo... Of a hat. It is the lamest thing I have ever seen from a genuine (?) news source.
10. Michael Aubrey says here that if he were to be stranded on a desert island with one of his teammates, it would be Carlos Maldonado. OMG ME TOO!!!!

I was in like, Stockbridge yesterday for work. Imagine! Had I had my car, I could have headed to SYR to see this game. Well, not really, but you get it.

Tonight in Syracuse! Millwood v Craig Stammen. Are you sad? Don't be sad, we'll come back in August...
Posted by Jenks at 9:47 AM