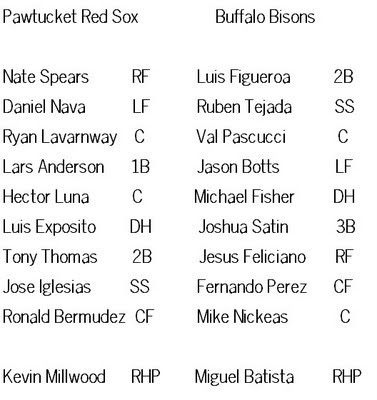 Buffalo finally wins, 8-7. This game was like, a 2002 matchup between the Marlins and the Astros.

Let's start with Kevin Millwood, who really dug in and tried. He threw 102 pitches! Millwood gave up five runs on seven hits through five innings.

Starter for Buffalo was Miguel Batista. Batista went six and gave up two runs, including a solo home run by Nate Spears. He also racked up nine strikeouts.

Here's what happened, exactly, and I'm gonna break it down to avoid confusion. I'll start with Nate Spears hitting a solo home run in the top of the first. That put the Red Sox up 1-0 until the bottom of the first, when left fielder Jason Botts hit a two-run double to give Buffalo the lead.

Batista got everyone out in the second inning, but in the third Lars Anderson hit an RBI double to tie the game.

Bottom of the fourth, Millwood still in. Third baseman Joshua Satin hit a one-out single. Millwood threw four balls to Feliciano. Two on, one out. And then Satin to third on a fly out. Catcher Mike Nickeas took a walk to load the bases with two outs. And then Luis Figueroa hit a two-run single. Are you kidding me with this guy? 4-2 Buffalo!

The Bisons added another run to their score in the fifth, courtesy of a Satin RBI single.

And now we approach the later innings. Bisons up 5-2. Top of the seventh. Gustavo Chacin takes over for Batista and really, where did the Mets dig him up? Chacin immediately got the first two PawSox out, but then Jose Iglesias decided it would be a good time to hit his fifth double of the season. And Ronald Bermudez, playing center for Che-Hsuan Lin, batted him in with a line drive to center. 5-3!

Bottom of the seventh. Tommy Hottovy is providing thus far adequate relief. I'm sure he was dreading the appearance of Val Pascucci, and for good reason: Scooch hit a two-run homer! OH YEAH CUE THE VAL PASCUCCI SONG!!!!!

So Pawtucket's down 7-3. And it's the eighth inning. Doesn't look good. But Pawtucket led off with back-to-back singles and then Anderson reached on an error. Bases loaded, no outs. And Gustavo Chacin on the hill. Chacin's response to the mayhem was to throw a wild pitch, scoring Nava from third. And Hector Luna said 'fuck it' and swung at the next pitch, HARD. HOME RUN!!!! Three runs! Tie game! HECTOR LUNA!

So Chacin did not, in fact, get the next three outs. He was replaced by Brian Sweeney, who wound up getting the win because of Royce Ring. Royce Ring is on the PawSox now, and I'm sure he wanted to make a good impression. It did not really work, because he gave up the game winning hit for Buffalo.

Ronald Bermudez got on base to lead off the ninth and it would have been cute if, say, Daniel Nava homered, but nothing happened. That's okay. Leave the Bisons with a little dignity. It's really fun, too, to avoid the sweep and get a win in the last game of the series.

Dale Thayer pitched the ninth and got the save. FIN.

two things:
1. I don't know who Keith McShea is, but he's got a dope leadoff: "If major league veterans Miguel Batista and Kevin Millwood ever meet up and trade stories about the night they pitched against each other in Triple-A in Buffalo, they'll have plenty to talk about.

It'll be the game which started with a helicopter landing and taking off in center field, the one in which Batista outdueled his fellow veteran by striking out nine before leaving with a three-run lead after six innings, and the one that was ultimately decided in a zany last two frames."

2. Kool Kid Kevin P breaks it down Rhody-style right here.
3. Luis Exposito was ejected from the game. He was later seen sobbing in the shower, clutching himself and sliding down the wall.
4. Royce Ring, IL Repeat offender: The Tides, the Braves, the Yankees. And now the Red Sox. Next stop: the Chiefs!
5. Gustavo Chacin is new to the org. He was released by the Astros a couple of weeks ago.
6. A fan's reaction to Royce Ring being released: "Noooo Royce Ring got released, das not cool as i got bunch of photo’s that i wanted him to signed, waited yesterday after the game but didn’t see him come out of the lockeroom." I don't normally do this, but LOL.
7. "We wanted to create that environment. A lot of young guys don’t understand that winning is a habit. It is an attitude that you need to take out there. You just don’t go out there to play. You go out there to win," Batista bench-coached after the game. (from Bisons Blog)
8. Peter Duffy from The Real Dirty: "Kevin Millwood! Miguel Bautista! It’s the marquee matchup of 2001! As an added bonus, the Herd brought in Gustavo Chacin out of the bullpen while the Paw Sox countered with former Met great Royce Ring. Runelvys Hernandez wanted to know if he could play. Rueben Tejada still only had one hit." That absolutely could have been something I wrote, except I would have spelled the players' names correctly. I mean, come on.

Okay, I gotta roll out. TONIGHT IN OMG THE MOST IMPORTANT INTERGALACTIC GAME! Tony Pena. Oh. Plus IronPigs and Ryan Feierabend. Hey, wait, I saw this game already! The PawSox lose even though Lavarnway homers! Screw that, I'm gonna watch a Bret Michaels reality show!
Posted by Jenks at 8:55 AM