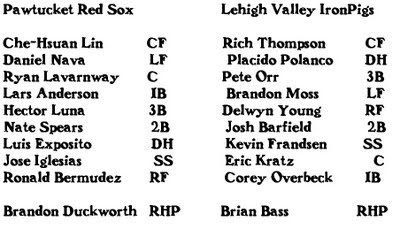 Okay, I will take it. Pawtucket wins, 4-3, splitting the series with Lehigh Valley and now the standings are... the same? Yes, Red Sox two games out of first in their division and a half game ahead of Durham for the wild card.

I am so tired and I don't really feel like doing this.

Alright, onward. Duckworth pitched five innings, gave up three runs. But you really have to give it up for the relievers, who held that one-run lead for the rest of the game. Go ahead and buy yourself a new purse, Ring, Royce, Hottovy, and Atchison. I read it in a magazine that you should give yourself little rewards. And also how to get sexy beach hair.

Starting pitcher for Lehigh Valley was Brian Bass, who you may remember from the Red Wings or the Indians (IL). Or maybe you don't remember him. Bass' line is nearly identical to Duckworth's, what with the five innings and three runs. Unfortunately for Bass, Les Walrond kind of blew it in the sixth.

Why don't we start at a very good place to start? In the first inning, Anderson hit an RBI single to give Pawtucket a 1-0 lead. In the bottom of the second, right fielder Delwyn Young doubled off Duckworth and was batted in by Josh Barfield, who I truly thought was going to be a force in the big leagues. A small force, but a force just the same. Sorry, I was really into the Padres for a while.

In the top of the fourth, with Hector Luna on first, Nate Spears and Luis Exposito hit back-to-back doubles. 3-1 Red Sox, but only for a moment and then the moment was gone. Bottom half of the fourth, the IronPigs went single single single to load the bases with no outs. GET EMBREE IN! A groundout and a sac fly brought home a couple of runners. Tie game, 4-4.

In the top of the sixth inning, Luis Exposito doubled and Jose Iglesias hit an RBI single to give the Red Sox the 4-3 lead, which they gripped tightly until the final out. Which was recorded by Atchison, probably very quickly, so bravo, sir.

And now the PawSox come home, so please spread your wings and let them come inside.

Two things:
1. I get the impression that Phillies fans really dug Duckworth.
2. HA! I was right about Atchison: He retired the side in the ninth with four pitches. EL MERO MERO.
3. "Pawtucket took a 1-0 lead in the first inning when Lin Chen-Hsuan led off with an infield single and two outs later scored when Lars Anderson smashed a single down the right field line." Darling little story, Tom Hinkel, but CHEN-Hsuan?
4. "Pawtucket pitcher Brandon Duckworth tested Polanco's back at one point, throwing one up and in, forcing him to twist and duck out of the way." WHAT?! That was intentional!!!
5. Ryan Lavarnway did not get a hit and he struck out twice. Luis Exposito went 2-4 with two doubles. I'll bet Exposito's feeling smug.
6. Lin stole a couple of bases. He does not lead the team in SB as you might think. That would be Tony Thomas, who is evidently kicking it with Brent Dlugach on Zach Daeges' yacht.
7. IronPigs manager Ryne Sandberg sez: ""Overback took a great swing on the ball that I thought had a chance to be a double or a home run or something [but] came up short of the wall. If you look at all the woulda-coulda's, we hit some balls hard to the outfield right down to Frandsen's at the end to right for the final out."

Wait, isn't it Overbeck and not Overback?

Are you fucking kidding me? HOW DO YOU NOT SPELL THE PLAYERS' NAMES CORRECTLY? Isn't this your JOB? Are you not being PAID? And I see this all the time! How stupid can you be? It's not like you have to spell hockey players' names, either. I'm so disgusted by this half-assery. Is it really too much to ask? SEAN MCADAM ALWAYS GOT IT RIGHT.

TONIGHT!!! It's Heather versus Lacey with their parents in town! Also, Pawtucket's back at McCoy and they're sooooo mad at the Louisville Bats. It'll be Millwood and Travis Wood. No sign of Sandy Madera, unfortunately.

PS Please enjoy this picture of Royce Ring and a baby. The look on the baby's face kind of says it all.
Posted by Jenks at 6:53 AM