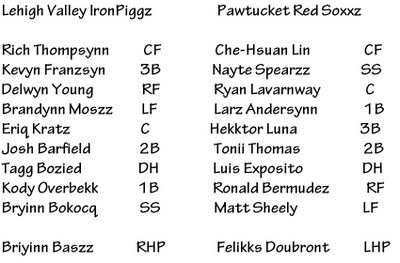 Like my hair band lineup? Pawtucket wins 7-2. Ryan Lavarnway continues his historical run of SMASH! Yeah, I said historical. Do not even act like it isn't cool. Don't be all like, "Yes, but it's a small sample size and he's got no real position and he's facing AAA pitching NONONO NO!!! Just go to a PawSox game for once in your life.

Red Sox starting pitcher was Felix Doubront. Doubront went from throwing like 90-ish pitches in his last couple of starts to 69 last night. He pitched 4 1/3 and gave up one run on three hits.

Scott Atchison, Clevelan Santeliz, and Jason Rice put their magic rings together and transformed into an effective relief corps. Most dramatic transformation goes to Jason Rice, who pitched two hitless, walkless (?) innings and had three K's.

Lehigh Valley starter Brian Bass stretched himself out, pitched seven innings, threw 101 pitches. Bass gave up five runs on six hits, including a home run by Matt Sheely. No, not really. The homer was Lavarnway's, of course.

Bass kept the Red Sox scoreless until the fourth inning, when the talented and lovely Che-Hsuan Lin led off with a single. Lin made it over to second on a pick-off attempt error and then over to third when Nate Spears grounded out. And then Lavarnway doubled. And then Anderson doubled. Hey, didn't that happen on Tuesday, too? Creo que si. 2-1 Pawtucket!

Later on in the sixth inning with the score tied at two, Lin and Spears led off with back-to-back singles. I am going to start a dating service called 'Back-to-Back Singles'. Does that sound porny? Not my intent. I was going to say that Lin must be magic or something, because he scored when Spears singled to third. Turns out that third baseman Kevin Frandsen made an error. And that's when Lavarnway stepped in and hit a home run. It's like science fiction. It's the mysterious work of the FSM.

But Pawtucket was wild and insatiable last night. When Justin De Fratus came in to relieve Bass, the Red Sox reacted with whorish frenzy. Spears got on base again, this time by way of an error. He stole second while Lavarnway was dicking around at the plate, taking pitches, working the count, obtaining a walk. Both runners advanced on a passed ball. Anderson singled to left, scoring Spears. Then Hector Luna, who's been quiet lately. RBI SINGLE HECTOR LUNA!!! 7-2 PawSox!!

Good work, everyone. Who needs Reddick or JC Linares? Or Kalish? Wait, no, we really do need those guys. I'm just worried about Matt Sheely getting released.

backstage pass:
1. Doubront left the game with some kind of leg cramp. He crumpled over on the mound, which you really don't wanna see.
2. Che-Hsuan Lin on his error: "I don't know what happened, I don't even want to think about it." He sounds a little freaked out.
3. Tony Thomas and Luis Exposito both went 0-4 with 2 K's.
4. Pawtucket's creeping up on Lehigh Valley. They are now only two games out of first in the Northern Division. All thanks to Luis Exposito!
5. Through six games at McCoy, the IronPigs are 2-39 with runners in scoring position.
6. Hey, red pinstripes are cooler!

Todaygame! More Pigs, more Lavarnway doing it to them. Kevin Millwood, Nate Bump. Nate Bump? Yes, he is still around.