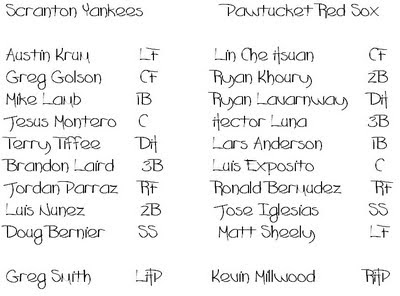 What the fuck is Ryan Khoury doing on the PawSox? Is that really the best they could do? I suppose Jeff Natale was unavailable. They must have been in a real pinch in Portland. Maybe Ryan Khoury is lovable? I am at a loss. How about we go get Charlie Zink, too? Jeez.

Pawtucket wins, 9-3. Kevin Millwood is stacked like that, seven innings worth. Millwood gave up a couple of home runs to Jordan Parraz and Midre Cummings. Oops, not Cummings. Tiffee. How old is Terry Tiffee? Triple-A is wacky.

Millwood gave up three runs. And here we have fresh fish Jeremy Kehrt from Portland, who's been in the system for three years and has managed to evade my consciousness. Kehrt pitched a scoreless inning, that being the eighth. Michael Bowden handled the ninth in quintessential Bowden fashion, with a hit and a walk. He didn't give up a run, though.

Your visiting Yankees starter was lefty Greg Smith, who gave up twelve hits. Three of 'em were home runs, which certainly must have thrilled the smallies in the stands. The first run came from Ryan Khoury, who hit a solo home run in the first to tie the game 1-1. Now, wait a minute! I refuse to believe that Ryan Khoury just happened to hit a home run in his first triple-A game this season. I'll bet he's buds with Greg Smith and Smith grooved one for him. That has to be it.

Never mind. Top of the second, Jordan Parraz hit a solo homer. 2-1 Yankees. Pawtucket answered back in the bottom of the second, when a sac fly by Bad Ronald brought Anderson home from third.

Bottom of the third, Lavarnway singled with one out. Lars Anderson hit a home run to right, 4-2 Red Sox. And then in the bottom of the fourth, Lin walked with two outs. Ryan Khoury followed the walk with a single, and then the nutty duo performed a double steal. Which was cool, because Lavarnway singled after that and they both scored. 6-2!

Pawucket scored its seventh run in the fifth, when Ronnie B hit a solo home run. Terry Tiffee replicated that feat with his own s.h.r. in the sixth. But that was the end of scoring for the Yankees! In the seventh inning, with Andrew Brackman taking over for G. Smith, Luis Exposito homered with two outs, no one on. It was a night of unlikely home runs... And love at first sight.

One last run! Eighth inning, Jose Iglesias was hit in the melon by a pitch to lead it off. Matt Sheely singled, Ryan Khoury walked. Iglesias had morphed into James Kang, who is not at all fat. Hector Luna was in the box when Brackman threw a wild pitch, which allowed Kang to score from third. And that's the ninth run.

Did you know that Che-Hsuan Lin tried to stretch a single into a double in the first inning, but Jordan Parraz threw him out at second from right? I know Lin's fast, but that was kind of crazy thinking.

ryan khoury doesn't want to fade away:
1. Terry Tiffee went 3-4 with a double and a home run. He is 32, not 47.
2. Millwood: Getting the pitch count up, ironing out mechanics, locating the ball. Then seeing what happens.
3. It was Khoury's first Pawtucket home run. He wound up going 3-4 last night. Did you know that Khoury first played for the PawSox in 2006? He probably called Tyler Minges after the game.
4. Luis Exposito also went 3-4. Hector Luna was the only starter who didn't get a hit. But Ryan Khoury did?
5. Also Mike Lamb. He can swap Fort Myers stories with Tiffee.
6. Iggy is probably going to be fine. Tony Thomas is on the DL, as is Nate Spears. And Dlugach and Nava are hurting. Can we get someone from Lowell? Please? How about we rush Daeges through his recovery and put his health at risk?
7. What the hell is an 'Air Hog'? These millennial team names have got to stop. No more River Hogs or Log Dogs or Sewer Fish or Stink Cats. Enough is enough.
8. Hey, check out this video of Jeremy Kehrt on television. It's unusual.

Tonight! Rochesteria! Kyle Weiland and Eric Hacker face off again, and this time Hacker will be the ultimate real champion. I'd drive out there, but it's a holiday and I'm sure there are no seats left. I hope everyone enjoyed the FIREWORKS AT MCCOY STADIUM 2011!

And also Josh Reddick's girlfriend. =)
Posted by Jenks at 7:10 AM