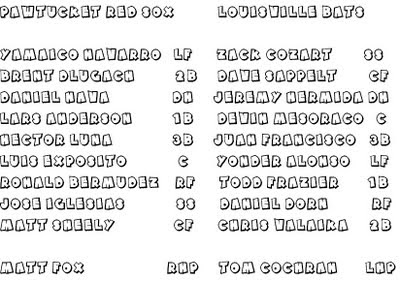 Red Sox win 7-4! Pawtucket starter/reliever/starter/anger management candidate Matt Fox(y) started the game and pitched four innings, but left the game with Pawtucket down a run. The extremely likable Scott Atchison took over for three innings, threw 39 pitches, got all the outs he needed, and wore the W like a tiara. Gracefully and grandly.

The Louisville Bats (If I had a freaking dollar for every time I typed 'Lousiville', I'd be able to afford a reliable car) challenged the Red Sox with lefty Tom Cochran, who does not wear a visor. Cochran wormed his way through five innings, giving up three runs on five hits, including solo home runs by Yamaico Navarro and Hector Luna. He left the game whistling and swinging his lunch pail, heading for the tavern on the corner for a couple of pints, his team winning 4-3. But when Rather Tall Reliever Chad Reineke took over, things went south.

Wait, rewind! Yamaico Navarro's home run was really cool. It was the first inning, which he led off, with a 2-0 count, to left field which is pretty short in Louisville (325'). Alright, it wasn't that cool. The first pitch was a little high and outside, the second was inside. I looked it up!

Oh, and then in the fourth inning while Cochran was pitching, Luna hit his solo home run to left. So that made it 3-2 Bats. Exposito doubled and Bermudez hit an RBI single. Tie game.

Except right fielder Daniel Dorn tied it in the bottom half of the fourth with a solo home run.

Okay, we can go back to Chad Reineke now. But don't turn your back on him, because he's got a gun! Top of the sixth, Anderson triples with one out. Line drive to center with an 0-1 count. Triples are the reason God invented television. Hector Luna hit a sac fly, and the game was tied again, 4-4.

And then the eighth inning was a cringe-fest. Reineke still pitching. He walked Nava and Anderson. Luna hit the ball, probably a grounder, and it should have been a force out but third baseman Juan Francisco made a throwing error. Nava scored, 5-4 Pawtucket!

And then Exposito made it on base thanks to a missed catch by shortstop Zack Cozart. Anderson scores! 6-4! Poor Cozart. And then! And then! Nate Spears was grounding out, but catcher Devin Mesoraco made a throwing error! Luna scores! Oh my god, the crowd must have been booing the crap out of these guys. 7-4 Red Sox!

Randy Williams closed the game out with two scoreless innings. Thank you, Deborah.

stand by for adventure:
1. Brent Dlugach went 0-5 with 4 K's. Aw, what a sweet kid.
2. “We walked two guys to get in that situation,” Bats manager Rick Sweet said. “But it was actually before then that we let it get away. We had two leads, and we let both leads get away. You just can't do that. We've been really struggling with that, probably the last week, 10 days." - JJ Hysell here, with added 'Esposito' bonus
3. Here is the official blog of the Louisville Bats. It is not written by a fan. It's a company blog, which makes it pretty useless for me. I mean it man, we need more IL fan bloggers! Help me out, people!
4. Cute story on Tom Cochran who did time in the indy league. Namely, the Can-Am League! Worcester! That's remarkable because those guys very rarely get scouted out. That is adorable.
5. "You look at him and he doesn't have outstanding stuff. But he keeps winning and getting people out. He reminds me of John Burkett. I don't know if Burkett had 150 wins in the big leagues but people were never impressed too much with his stuff. He just got people out." - Dusty Baker (!) on Reineke. Hey, I loved John Burkett. That guy knew how to party.
6. So Cochran played for a team called the Wild Things. Okay. Do you know who else played for that team? Former PawSox great Patrick Stanley! Stanley got one start for Pawtucket in 2009. I will have to look that up, because I'm drawing a blank.
7. And Cochran was in the Boston system? I am awash in love. And I'm learning so much today!

Alright. Tonight! Homer Bailey, who disappointed so many people. Douby Brothers for Pawtucket. Do you read the Bus Leagues Blog? Oh, you must, it is superlative.

This was really fun to write.

If it isn't already evident, I totally vamp my way through these posts. I don't plan or review or lay out. I am working my way through the box score and writing as I go. It makes everything a little scattered and amateurish, but it works for me.

And so getting to the end and learning about the starter, Tom Cochran, got really exciting... The first half of the post, I'm just going over his line, not having any idea who Cochran is. And then, POW!

I like this one a lot. I'll add it to my portfolio.