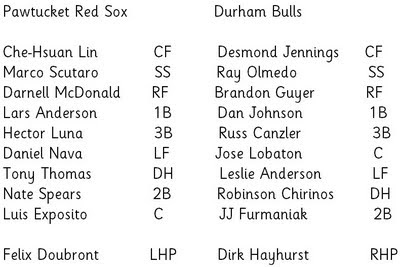 Felix Doubront (Brothers) got the start, working into the fifth inning and getting a couple of outs before allowing left fielder Leslie Anderson to single. He was subbed by Tony Pena, who wrapped things up in the fifth, but not before giving up a walk and a single to score Anderson. Pena went on to pitch a couple more scoreless innings.

Starting pitcher for the Bull was Dirk Hayhurst. Hayhurst didn't quite get as far as the rehabbing Doubront, going 4 1/3. Hayhurst was pretty much cruising until the fourth inning, when Darnell McDonald led off with a line drive single to left. That's probably because he KNEW Lars Anderson was gonna go yard, which he did, and it was 2-0 PawSox. What did I tell you? LARS SMASH!

Pawtucket put together a calamitous fifth inning as well. Luis Exposito led off with a single. Che-Hsuan Lin batted afterward and flew out to center, but Marco Scutaro singled to put runners on first and second with one out. Good night, Dick Hayhurst. Please welcome Dane De La Rosa, of the Virginia De La Rosas. De La Rosa is a mountain, a beast! He's very tall and weighs 245 lbs. Darnell McDonald was not impressed, stepped up to the plate, and hit a three-run homer. Oh my god, I miss Darnell McDonald.

De La Rosa wriggled out of that inning and went on to pitch another. Stellar and lunar relief was provided by the sensible non-partyer Mike Ekstrom, who rather smugly pitched a pair of scoreless innings, striking out McDonald, Anderson, Nava, Thomas, and Exposito. Hell yeah, Mike Ekstrom. Too bad righty Rob Delaney was less than Ekstrom.

Delaney came to the hill for the ninth inning to suppress the Red Sox so Durham could get their five-run rally on. Lin led off with a tiny little single. Lin later scored on a single to center by Lars Anderson. And then Anderson scored when the incredible, edible Hector Luna tripled.

The Bulls set the world on edge when they singled twice off Randy Williams in the ninth. Clevelan Santeliz stepped in and got the last two outs, though. Yeah.

sexxxtrom:
1. Nate Spears hit a triple! And Darnell McDonald and Lars Anderson had three RBI apiece. I smell a buddy movie! He's an infielder, and he's an outfielder! Throw them both into a muscle car and have them solves crimes. In San Francisco. McDonald can wear turtlenecks.
2. Nothing from Tony Thomas? Rats!
3. Durham right fielder Brandon Guyer had a couple of hits, but otherwise the offense was crickets.
4. Dane De La Rosa is a very naughty boy. He was recently suspended a few games for some retaliatory plunking.
5. Dirk Hayhurst said, "The Rays have instituted a new vegan diet which has been screwing up my ability to get a hold of hamburger grease, which is a key element in being able to throw the skoodoush which, as you know is a money pitch for me. That’s a factor. I learned a great splitting, sliding, knuckling two-seam skoodoush from this guy named Toledo Jones back in A-ball, and that’s my go-to pitch I just kept missing arm-side with it. I wanted to lull them into a false sense of confidence and then use that against them just like General Patton would do … " - Mike Potter, Indy Week. Wait, did he really say that?

This evening, please get a load of Matt Fox, who will be facing Durham's Alex Torres. Che-Hsuan Lin's excited and you should be, too.
Posted by Jenks at 8:01 AM