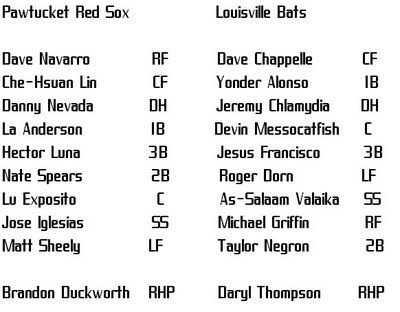 You know what baseball players love? Day games! Especially games that start before noon! Meanwhile, I slept nice and late even though I know everyone's waiting for me to post. Geez, sorry I'm not PawSox Blog, waking up at dawn to get my work done! Sorry I like to party! Sorry I enjoy my free time! I'm sorry I'm not the most boring person ever! I'm sorry I'm not poor!

So... Why did Ryan Kalish get kicked out of this game? He wasn't even in the lineup! Ninth inning, tossed! I'm assuming a lot of 'BLAH BLAH BLAH' from the dugout while wearing his grey hoodie. Yeah, I miss Ryan Kalish.

We can finally start the big meeting! Kentucky wins, 7-2. Brandon Duckworth, bless his Italian heart, took the loss. Got a couple of outs in the sixth but just couldn't seal the deal and left with L'Ville up 4-2. That's what happens when you give up back-to-back doubles, throw a wild pitch, and give up a three-run homer to left fielder Daniel Dorn.

Jason Rice got the last out in the sixth, but led off the eighth by walking former PawSox great Jeremy Hermida. And then Rice walked catcher Devin Mesoraco. Don't 'Mes' with Mesoraco!

Rice was so unnerved by Mesoraco without a mask on that he balked. Advance ye, all runners! Third baseman Juan Francisco was happy to single and score Hermida. Backwards K for Daniel Dorn, but Rice walked Chris Valaika to load the bases with one out.

Oh, hey, look, it's Blake Maxwell, the nuttiest reliever since Beau Vaughan! Maxwell was no help at all because he hit the next batter, Michael Griffin, walking in a run. Then Kristopher Negron hit a sac fly. 7-2. Final score.

Che-Hsuan Lin hit his first triple-A home run in this game! He's a big boy now! Get him a turkey leg wrapped in bacon!

haaaaaaaaa:
1. Sorry, I totally overlooked Bats starter Daryl Thompson. 7 1/3 with 5 K's, two runs on four hits. “It was pretty decent,” Thompson said. “I'm not pleased with the (three) walks and giving up that home run. … Other than that, I felt pretty good.” - Michael Grant can be reached at (502) 582-4069
2. Video featuring Devin Mesoraco, who looks like a baby, but like a baby who got hit by a truck and then buried and then somehow punched his way through the cemetery dirt and went around killing people.

I am going to stop right here because I have less important things to do. I'm picking up my snaps from Toledo, so perhaps I'll share them! (That ballpark picture up there is mine, because I went to Louisville last summer. Of course I went to the bat factory!) Meantime, more Louisville Bats tonight. Kevin Millwood! How can we lose?

Thrillwood's opposed by Scott Carroll. Let's do this thing.