The 26th of June in Indianapolis with clouds '11 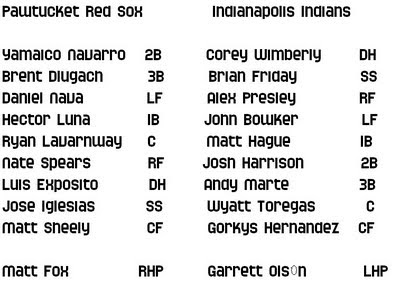 Jason Rice only pitched one inning less than the starter, Matt Fox. Four K's to keep close to his heart last night.

Garrett Olson's first inning was shaky. Thirty-nine pitches. Back-to-back singles to left field, right away. Daniel Nava did not strike out, but walked. Bases loaded, no one out, Hector Luna is handy, RBI single. Force out, sac fly, 3-0 Pawtucket.

Top of the ninth, a flare from the Red Sox. RBI Luna, again, to tie the game. Bottom half, Randy Williams hits leadoff batter, walks the next pair. No outs? None. Bases loaded? Aye! And a danger in Presley. Strikeout puts crisis on hold, but Randy is wild with Bowker. Gorkys (A Mad Russian?) dashes home, victory to the Indians.

i've got this urgency to get things off the ground:
1. These minor league Pirates made a wench of Iglesias, who had no hits and struck out twice.
2. First base is evidently not in Lavarnway's repertoire, as Luna took over for Anderson last night. Dlugach played third, went 3-4, and still has the ability to surprise himself.
3. Do you want to talk about Chris Leroux, who pitched 3 and a third last night? He's a big sexy Canadian! YEAH GET SOME!!!

TODAY!!! AT TWO!!! Felix Doobie Brothers v Justin Wilson... Yeah, you love it. Still in Indiana, too, which... Imagine the fields of goldenrod... And Chris Leroux...
Posted by Jenks at 8:14 AM