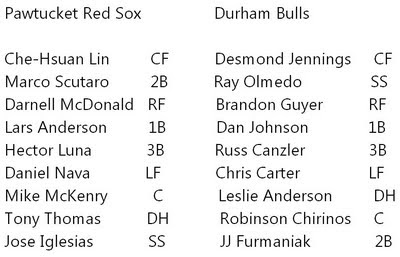 Bulls win 5-4. Know what happened? Pawtucket was ahead 4-3. Center fielder Desmond Jennings hit a solo home run in the seventh, tied it. Bowden came into the ninth and led it off with a walk to catcher Robinson Chirinos. JJ Furmaniak went for the sac bunt and it was too much for the Red Sox, their hearts couldn't take it. So the runners were at first and second, no outs. Jennings was up, Bowden intentionally walked him. THIS INSTANCE OF BASEBALLERY LEAVES ME BEWILDERED. It's such a gamble, and in this instance, it did not pay off. You have a man like Ray Olmedo flipping a single into right and winning the game.

I saw all of this on television. Of all things, walking the bases loaded with no outs in a tie game, bottom of the ninth. Hey, you got this, Bowden. ARNIE BEYELER, WAS THAT YOUR CALL? I understand the real ultimate power of Jennings... I don't know, I'm stupid about baseball as I've proven over and over.

Bowden takes the loss, win goes to Bulls reliever Jake McGee. Durham starter Alex Torres and his jelly doughnut pitched 4 2/3 and walked half the ballpark. Thanks? Matt Fox's start lasted five innings and was rather humdrum. Fox gave up three runs on six hits, including a Chris Carter home run.

So Pawtucket is televised and people who are unfamiliar with the team this season must have been bored to death. Someone, somewhere probably said, "That's why they're not in the majors." Minor league game in every sense.

it hides a messy stain:
1. There is not much less interesting than a five inning start. It's organizational. How many have I seen from Pawtucket? No way to count. I get so jealous when I see one of those RA Dickey complete games... Or opposing pitchers throwing 115 pitches. That's a game. You can almost convince yourself that triple-A is real.
2. Lars Anderson hit a two-run double in the top of the first. I am convinced that hearing he was too fine and polite at the plate pissed him off.
3. Che-Hsuan Lin went 0-4 with two K's.
4. Durham Bulls enthusiast Adam Sobsey's game report here.
5. Pawtucket: Two errors, a passed ball, three wild pitches, Lin caught stealing, 13 left on base... Slop.
6. WAIT A MINUTE. Durham starter Alex Torres threw 107 pitches and he didn't even complete the fifth inning? Only 59 were strikes? Runners left in scoring position, two out: McKenry! Tony Thomas! Hector Luna! Darnell McDonald?! Twice? And Che-Hsuan Lin, thrice?! I hope you burn with shame like a slap to the face, Pawtuckets.
7. Desmond Jennings is not Carl Crawford.


This afternoon in Durham! Kevin Millwood. Dude, I don't care if Mike Remlinger is pitching, just C Sharp or you'll B Flat. Opposing will be Edgar Gonzalez. I should skip work, right? RIGHT?
Posted by Jenks at 7:51 AM

A smal correction that might clear up your assessment of walking the bases loaded. The sac bunt by Furmaniak did not result in runners on 1st and 2nd. The botched throw to first actually ended up putting the runners on second and third, which means no forced out on the next play. They didn't walk Jennings because of his homerun power (though of course he had just hit one). They walked him to set up a force at every base--especially at home. It's the standard baseball move in that situation and they would have IW'd any hitter there. It gives them a much higher percentage out than leaving the runners at 2nd and 3rd with no need to run.

Thank you very much!