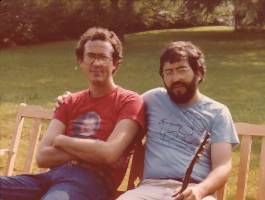 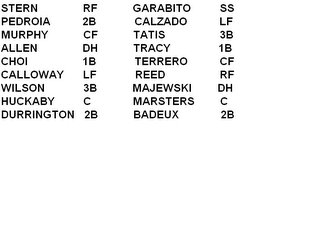 I made the lineup on the Windows "Paint" feature. It's so easy, even a caveman could do it!
I also tried to scan my scorecard, but it didn't work.

Kyle Snyder started this game and did a pretty good job.
(6 innings, 2K, 1BB, 5H, 1ER )
Craig "molecular biochemistry" Breslow had a hand in the ruining of everything when he gave up 4 runs in the 7th inning. I'm not going to dump on him too much because generally, he does a good job.
Barry Hertzler gave up another run in later innings, but the worst offender of the evening was Jermaine "Jermanie" Van Buren. There he was, trying to nail it down in the ninth... and Tracy goes yard with a runner on and one out.

I am SO tired of seeing Van Blow-Me in the 8th and 9th. He just walks too many runners. No mas! Use him MAYBE for long relief or mop-up or something.

Miscellaneous bullpen guys came in and filled out the remaining 3 innings.

John Stephens started for Ottawa and remember him? He was that Australian guy from last year or the year before. What a wealth of knowledge I am! Stephens matched Snyder's performance, giving up 2 ER in six. Then this Winston Abreu guy comes in and he's one of those little scrawny guys who can inexplicably throw the ball like 98 MPH. You know what I'm talking about?

Eddy Rodriguez in the 8th was a good friend of Pawtucket's, giving up 5 runs without getting ONE OUT! And here's the thing: the Ottawa bullpen looked like crap and Pawtucket should have won this game. GUH.

Offensively, Pawtucket put a hurt on the Lynx in the 8th. I would like to note that Ken Huckaby actually got on base in the 5th and even made it home. He must have been completely bewildered when he was standing on third base, since I doubt he's ever seen it before. Lynx catcher B. Marsters was charged with 3 passed balls in that inning, which led to 2 Pawtucket runs. You should have seen how mad he was!

Ottawa's Marsters atoned for his PB's in the 12th by doubling in the winning run offa B. Baker.

Two things:
1. Like to take a second to recognize Dustin Pedroia. He's a slick little infielder... know how you kind of hold your breath a little when the SS runs down an infield hit? Pedroia seems to get it every time, and then zip it over to first for the out. Brilliant. Gives a good 6-4-3 also.

I'll be at the park Thursday, weather permitting. Ciaocito.
Posted by Jenks at 1:22 PM

I'm not internationally known
But I'm known to rock the microphone

That song sprang into my head today outta nowhere!