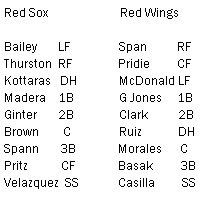 Charlie Zink continues to kick ass for the PawSox. Golf Boy pitched six two-run (one earned) innings with two walks and two K's. The crazy part is Chris Smith coming in as his reliever, handling the last three innings with only one hit and four strikeouts. Chris Smith with authoritah! And Pawtucket only uses two pitchers in one nine-inning game? Wacky!

Very exciting Twins pitcher Francisco Liriano started for Rochester and panicked Minnesotans cried out, "Oh, gosh!" Liriano walked five batters in 4 1/3 innings. It's okay, though: he only gave up four runs on five hits. He's working his way back! He had three strikeouts, right? (Bailey, Kottaras, and Spann.)

And the thing is... his first inning was uno, dos, tres with a strikeout, a flyout, and a groundout. So at first everyone must have been optimistic. And then he goes and throws 94 pitches in under five innings.

Relief pitching ensued. William Domingos Barrett (not an actual American poet) finished off the fifth for Francisco and then got a couple more outs. Barrett goes by "Ricky" for some reason. The willowy and mysterious Mariano Gomez pitched a little bit, followed by Julio DePaula.

Jeff Bailey continues to be all comfy in the leadoff spot, homering off FL in the third. Hey, you're not supposed to do that, kid! Just get on base! Bailey also struck out twice. Not good.

Joe Thurston doubled. I love JT. Sandy Madera ended his hitting streak, going 0-3 with a couple of walks and a run. Not bad.

Chad Spann got his second RBI of the season. Damn, the kid's RED HOT! Spann has now struck out 19 times and walked TWICE. This is unacceptable. If you are going to keep him in the lineup, he should be batting ninth. Period. Van Every's probably so bitter.

!
1. It snowed a little during the first inning in the Flower City. I'll bet it was so pretty on the players' eyelashes. Aw.
2. Bailey's home run was cheap... the wind carried it out.
3. Red Wings roster guy Jon Knott got sold to the Phillies after the game. It's fun when he plays because you can say "Jon... Knott gonna get on base. Jon... Knott gonna move the runner over." They also released airhead catcher Eli Whiteside for Ryan Jorgenson, who's being serving a 50-game drug suspension.
4. Check out the Providence Journal story on CZ here.
5. Former Liriano teammate Gil Velazquez had this to say: "He definitely doesn't have his fastball like he used to. That's what sets up all his pitchers(SIC). He was throwing 96-97 when I played with him, and his slider was 91, 92. He had filthy stuff, and he doesn't have that anymore. I never felt he could beat me with his fastball." Thanks, Gil! Wait 'til I tell the guys in marketing!


The PawSox open up a four-game series v. Syracuse TONIGHT at 7. YES. The struggling Devern "Denver" Hansack will face righty Kane Davis. Who?
Posted by Jenks at 2:53 PM