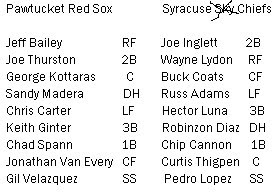 Devern Hansack once again failed to go deep, but pitched okay. In 4 2/3 innings, Hansack gave up two runs on six hits, walked one and struck out five. Tah-DAH! Abe Alvarez finished off the fifth and tackled the sixth inning... and even a little bit of the seventh. Alvarez gave up three hits and a couple of walks and ultimately got the win.

Eric Hull, Jon Switzer, and Bryan Corey all got some work in as well. Hull gave up the third run.

Kane Davis started for Syracuse! YEAH! Davis pitched into the seventh inning and was responsible for five runs. Davis struck out seven guys on the PawSox before he clocked out for reliever Jordan De Jong. I may have seen De Jong pitch once or twice. Lefty Mike Gosling came in for the eighth when JDJ got into some hot water. Mikel? McDonald pitched the ninth inning. Yeah, Mikel. I'm confused because his player page is labeled "Mikel McDonald" but his full name is allegedly "Michael P. McDonald". Hey, Mikel? Why should you change? HE'S the one that sucks! Whatever. He's from Maine so I guess that explains it.

Oh, yeah, the batters. Full-grown men Sandy Madera and Jeff Bailey each homered (Madera with a runner on, Bailey all by hisself). Madera and Bailey (along with catcher du jour Kottaras) also doubled! They're a lot like twins. Bailey and Kottaras went 3-5. Joe Thurston went 4-5 and stole a base. And got caught stealing.

Chad Spann went 0-4 with an error and a strikeout. I'm going to start a rumor that he is a vampire and hand out wooden stakes at the box office.

Syracuse... better than Rochester?
1. I talk about Jeff Bailey endlessly but hardly ever mention Keith Ginter. But Bailey's 9th in the International League for batting (average) and in 7 games is 13-for-29 (.448) with 2 walks for a .484 OBP. Those seven games would be his leading off games.
2. So here's something about neglected infielder Keith Ginter: His favorite actor is Adam Sandler. Hey, professional baseball players? Could you try a little harder to have interchangeable personalities?
3. Mike Lowell bought the Pawtucket Red Sox a complete spread of ribs from a tacky off-ramp rib chain when he was at McCoy. RIBS?
4. Sandy Madera grew up with David Ortiz? Small world!
5. Do you know Chiefs pitcher Kane Davis? You might, Rabbit, you might. Davis is 32 years old, has been playing pro ball for 16 seasons, and Syracuse is the 22nd team he's pitched for.
Nice Kane Davis photo here.